From Fancyclopedia 3
(Redirected from WSFS Inc.)
Jump to navigation Jump to search

The sad story of WSFS, Inc., while only an episode in the long history of the World Science Fiction Society, and just one of the many occasions when All Fandom Was Plunged Into War, epitomizes the recurring idea held by some that fandom, and especially conventions, and double-especially Worldcon, are too important to be left to amateurs, but should be managed by experts — usually themselves.

In earlier days, this was closely related to a feeling that there ought to be an über fan organization to which all fans belong and which represents (and, not uncommonly, manages) fandom. The N3F, which still exists, was one such organization.

The aftermath — a legacy that continues to today — shows that most fans prefer a decentralized approach, and react poorly to authoritarianism. Nothing will draw blasé old fans out of the voodvork and into the Business Meeting like a whisper that somebody’s trying to resurrect WSFS, Inc. 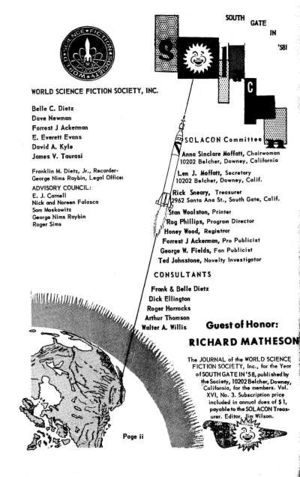 Solacon, the 1958 Worldcon, gave pride of place to WSFS, Inc., in its PRs, putting it above the con committee itself. Yet six months later, WSFS, Inc., was effectively dead, destroyed by the fairly general revulsion of fandom and Chair Anna Moffatt's gavel.

(Note that the Falascas, while initially apparently supporters, fairly quickly became major movers in the dissolution of WSFS, Inc. This is covered in their three-issue fanzine, Fandom's Burden online at fanac.org.)

WSFS, Inc. was a really big deal in the fanzines of the day. (Walt Willis wrote a screenplay of it called "The Raybin Story".) You can get a good feel of the debate by reading a newszine like Fanac and watching as the affair unfolds week by week. Material can be found in:

To add to the general confusion, at least two 1960s Worldcons (Pacificon II (1964) and Tricon (1966)) had a WSFC, Inc. (World Science Fiction Convention, Inc.) as their corporate sponsor.

There exist the minutes of a meeting of this WSFC, Inc., held in April 1966, where new officers of the corporation were elected. The outgoing officers were Pacificon II's and the incoming the Tricon's. None of the officers of the old late-50's WSFS, Inc, seem to have played a role.

We do not know if this WSFC, Inc. started before Pacificon II or lasted beyond Tricon, and as an American corporation it played to role in the intervening Loncon II.

At the Baycon business meeting (1968), Jon Stopa was appointed to convene a committee to study holding a North American Natcon when Worldcon is outside North America. The initial committee consisted of Stopa, Bruce Pelz, Earl Kemp, Al Lewis, Bob Tucker, Leigh Couch, Elliot Shorter, Tony Lewis, George Nims Raybin, and Banks Mebane. While its charter did not cover the reorganization of WSFS as a whole, the necessary changes to the rotation system were nearly as significant.

Their approach was extremely formal and bureaucratic, but it basically created a Board of Directors to oversee individual Worldcons with the power to depose a concom. It was a reasonable codification of a flawed idea.

Created at the direction of the Business Meeting at Noreascon Two in 1980, the committee was directed to "reconsider Article VII through the end of the proposed WSFS Constitution, whose first six articles were accepted at Noreascon II."

It failed to present a report at Denvention 2 the 1981 Worldcon. It appears that this committee was allowed to lapse and a new committee chaired by Dalroy Ward was created to look over the current drafts and report back at Chicon IV in 1982. It failed to report again at Chicon and was dismissed.

This seems to have been the last attempt to rewrite the WSFS Constitution from scratch.

There seems to have been yet another committee established in 1984 to report to the 1985 WSFS Business Meeting with Ross Pavlac chairing. (Other members included Ben Yalow, Bob Hillis, Jack Herman, Ray Nelson, Victoria Smith, Lew Wolkoff, Leslie Turek, Alan Rachlin, Gail Kaufman, Gary Farber, Rich Zellich, Yale Edeiken, Scott Dennis, and Larry Smith.) For a somewhat biased (but amusing) view of the committee's report at the Aussiecon 2 Business meeting, see File 770 59, p. 15. The committee was continued with Ben Yalow as chair to report back at ConFederation in 1986. It, also, seems to have faded, whimperless, away. (Note that this does not seem to be the Standing Committee.)

The Standing Committee was established as a much scaled back and reasonable mid-80s attempt to solve the same problems. It would exist to handle business that needed a continuing body (such as trademark registration). Its membership was a combination of elected members and members appointed by the various Worldcons. The creators hoped that it would in time build confidence within fandom and be trusted with slowly, evolutionarally-enhanced, powers and might in time serve the function in the role that WSFS, Inc. was intended to fill.