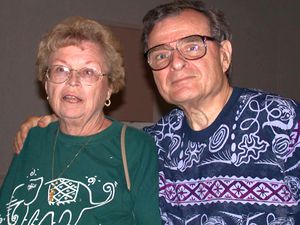 When Roger Sims was 19, in 1949, he called a phone number in the letter column of a prozine, discovered Detroit fandom and as a result entered fandom that same year. He has been a member of a club continuously since.

His first club was the Detroit Science Fiction League (the Misfits); his second was the Lunarians of New York, his third, The Cincinnati Fantasy Group. Currently he is a member of the Orlando Science Fiction Society.

He was co-chair with Fred Prophet of the Detention, the 17th Worldcon held in Detroit in 1959, and was "ConChair Emeritus" at Detcon 1, the NASFiC in Detroit in 2014.

His first Worldcon was the 1950 NorWesCon, Portland, OR, and he has attended at least 56 Worldcons. At Nolacon in 1951, he was one of the people staying in the famous Room 770 (he was actually registered in the room).

Roger starred in the 1983 fannish video Faans. He was the fan GoH at six regionals.

He was on the advisory council of the dreaded WSFS, Inc.

He tells the story of the drive to SFCon, the 1954 Worldcon in San Francisco, with Harlan Ellison and George Young. Harlan was driving and made an error in judgment and they were chased by a police car. Harlan said "Let's change seats -- I don't have a license!" so -- while still being chased -- they switched drivers and Roger was able to talk his way out of the ticket.

He also has a story about hectography.

His fanzines include DUFF Talk-About, Fantasy-Scope and Teddy Bear. He was appointed head of the Teddy Bear Army in 1954. He was a member of SAPS, for which he produced Hay is for Horses, and FLAP.

He has been married to fellow fan Pat Sims since August 16, 1964, having met her at Midwestcon the year before. Previously, he was married to Mabel "Mae" Young, George Young’s sister. Bennett Sims was his cousin.