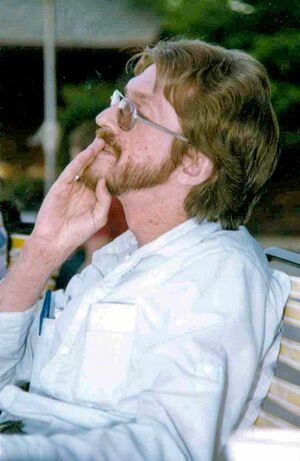 William L. Bowers was a long-time fanzine, club and convention fan from Ohio. He began publishing fanzines on a hectograph in 1961, attending his first con, Chicon III, in 1962.

Bowers co-published Double:Bill with Bill Mallardi in the 1960s as well as Star*Dust. In 1970, he started his genzine Outworlds, which he continued publishing until his death. The final issue, #71, was partly finished when he died. In 2020, Pat Virzi, Jeanne Bowman, Alan Rosenthal and Rich Coad completed and published it, together with a festschrift Afterworlds.

He also published the sometimes perzine, sometimes genzine, sometimes apazine Xenolith for some 50 issues beginning in 1977, and the apazine Neither Rain, Noir Murder..., among others. He participated in numerous apae, among them FAPA, MiSHAP, FLAP and DAPA-Em. Other fanzines included Abanico.

Bill was fond of making lists and addicted to ellipses. He had a strong interest in typography and publication design, and was happy to mentor friends who shared his enthusiasm. He was one of the first faneds to move to offset printing, and enjoyed making his fanzines look as much like slick magazines as he could.

Bowers won TAFF in 1976 in a tie with Roy Tackett, but there was only money for one to travel, and Bill withdrew. TAFF administrators offered Bill the opportunity to finally take his TAFF trip in 2001, on the Silver Anniversary of his original TAFF win, but he was unable to make the trip.

He was croggled to find out he was Fan GoH for Iguanacon II after the bid won at MidAmeriCon — the committee had neglected to invite him. Terrified of public speaking, he spent the next two years preparing by giving “practice speeches” friends set up for him at regional conventions, beginning with ConFusion 12 in 1976. The speeches proved popular enough that he was still giving them years after the 1978 Worldcon. He delivered his ninth speech at ConFusion 6 and/or 7 in 1980.

He co-chaired the relaxacon Spacecon with Rusty Hevelin through the 1980s, chaired Corflu 4 and was on the committees for Ditto 5 and Ditto 10. He was a member of the Niagara Falls in '98 Worldcon bid. 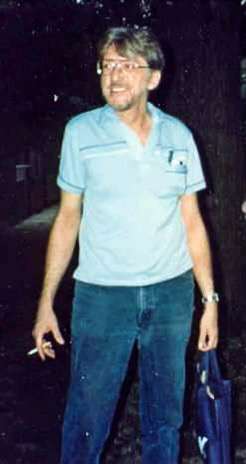 Tall and lanky, Bowers had light reddish hair and a sparse beard. He and his short, dark, hirsute friend Mike Glicksohn made such a contrast in appearance that it became a running joke between them.

Though a quiet introvert, Bowers made friends with fans of all ages, who jokingly nicknamed him Father William, after the Lewis Carroll poem.

Along with fanzines, Bowers had a Kolektinbug passion for books and videos, and was an avid con-goer in the 1970s and ’80s. Meanwhile, he kvetched so much about not having time or money to pub his ish that his friend Leah Zeldes gave him a kitten, which she named Responsibilty, so he'd have to stay home more. That didn't work, but he came to love the little black cat, whom he called Sponse, so much that when she died, he kept her ashes to be buried with him.

Originally from Barberton, Ohio, a small town near Cleveland, he was the son of Clifford L. Bowers and Eva Mae Otto, and brought up in a fundamentalist Christian household that forbade movies and television, to which background he attributed his later addiction to them.

Bowers became a draughtsman after high school. He served a stint in the Air Force and then went back to his old job until 1977, when he chucked 15 years' seniority and moved to Cincinnati to be near Paula Gold, although she was not interested in a serious relationship with him. He had trouble keeping steadily employed in Cincinnati, though he spent some years, on and off, working for Hasbro, the toy makers. However, he became active in the CFG, and continued to publish and go to cons.

He was married twice, to Joan Bowers in the late 1960s — she is credited as co-editor of early Outworlds until they split up in 1971 — and in the late ’80s, briefly but disastrously to a mundane who fafiated him, cut him off from all his friends, then made a false report to the police about him, and left him broke.

Bowers suffered many health problems. For many years, he took steroids for a skin condition, and these led to osteoporosis. The pronounced slump from bone loss affected his lung capacity; he was also a chain smoker. The combination developed into emphysema, which ultimately killed him, though up to the end he was unhooking his oxygen in order to have a cigarette.

Some issues of Bowers' zines are available on eFanzines.com and fanac.org