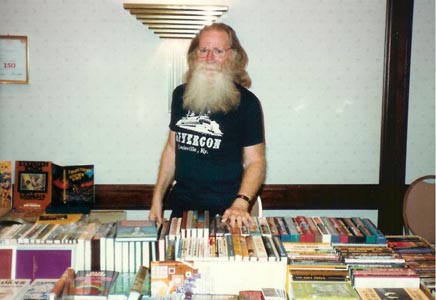 Rusty Hevelin (né James LeRoy Hevelin, aka Rust E. Barron and Rustebar) was a fan, fanzine publisher, collector, and huckster. He was originally a redhead, hence the nickname “Rusty.” He was the FGoH at the 1981 Worldcon, Denvention Two. He won DUFF in 1975, and was the recipient of the Hevelin to Holland fan fund in 1990.

He wrote locs to the prozines in the late ’30s, qualifying him for First Fandom, but discovered actifandom in 1941 when living in Riverside, California, and attended a meeting of the Los Angeles Science Fantasy Society. Later that year, he hitchhiked to Denver to attend the Denvention. Afterward, he moved to Philadelphia, where he joined PSFS, and was elected president. For many years, he lived in Dayton, Ohio, near Cincinnati.

He co-edited Fantascience Digest with Bob Madle. Starting in 1942, he published Nebula with Larry Shaw. He was a director of the N3F. He attended the Pacificon.

He mostly gafiated from 1948 while going to college (Antioch), marrying and raising his family (he had four sons — John, Scott, Bruce and Will), only turning up at NyCon II in 1956 and contributing to FAPA. (He was a member of FAPA at least three times!)

He returned to actifandom in 1965 and started huckstering old prozines at Baycon in 1968. He was one of the founders of Pulpcon. He chaired the (losing, alas!) Detroit in '82 Worldcon bid and was one of the 7 for '77. He worked on the early stages of Iguanacon.

Along with Gay Haldeman, he often participated in panels for neos such as "How to Enjoy Your First Convention." Just before PgHLANGE VIII in 1976, he shaved off his beard. Someone put up a survey in the dealers room door asking whether people preferred him with or without the beard. The "grow the beard back" respondents won by a landslide.

He and Bob Tucker had a long-running shtick where Bob called Rusty “Dad,” and Rusty called Bob “Son,” and they made some people believe it, even though Rusty was younger than Bob. Tucker explained their different surnames by saying, “He never married my mother.”

On January 16, 2012, Pulpfest announced that the Munsey Award would be renamed the Rusty Hevelin Service Award. He was a member of PEAPS.

His collection of fanzines was purchased by the University of Iowa, who are digitizing the fanzines coordinating a transcription project using volunteer labor.