In his theory of Numerical Fandoms, Jack Speer defined First Fandom as the fannish era of 1933 through 1936. However, the term has come to encompass fandom from its earliest days — including what Speer called Eofandom, the founding of the Science Fiction League and the Scienceers in the late 1920s — through the late 1930s.

Anyone involved in the microcosm, in any form of fanac, up through the first Worldcon in 1939 is now considered to be a member (and is so tagged herein).

As far as we know, centenarian Bob Madle, who died in October 2022, was the last survivor. 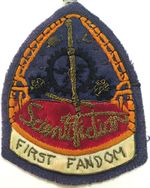 A club for members of the first group. Formed in 1959, the club was the brainchild of a group of Midwestern fans consisting of C. L. Barrett, MD., Don Ford, Lynn Hickman, Bob Madle, and Lou Tabakow.

In its early literature, it described itself as:

They had a distinctive triangular membership patch and the motto, "First Fandom is not dead, only doddering," which has been attributed to Bob Tucker. 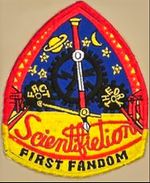 The group calling itself "First Fandom" today is descended from that First Fandom club, but no longer has any true First Fandomites as members and long ago abandoned the requirement of actually having been active during the First Fandom era.

Membership formerly encompassed "dinosaurs," those very few fans left who engaged in fannish activities up through the first Worldcon, which was held over the July 4, 1939, weekend, and "associate members," who have been active in fandom for at least 30 years.

The club continues the First Fandom Hall of Fame Award for contributions to the field of science fiction -- whether as a fan, writer, editor, artist, agent or combination -- dating back more than 30 years, and the Sam Moskowitz Archive Award for excellence in science fiction collecting. They are usually presented annually during the Hugo Awards ceremony at Worldcons.

The current president of the club and editor/publisher of Scientifiction: The First Fandom Report, a quarterly club newsletter, is John L. Coker III. Jon D. Swartz and Coker are the editors of the First Fandom Annual, published since 2016.