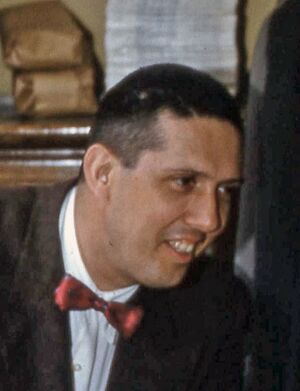 Ohioan Donald Eugene Ford began reading sf in 1930 and attended Torcon 1 in 1948. He was a tall man (6'6") who had a huge collection of prozines and pulps, and did some bookselling. He was a co-founder of the CFG and he attended Midwestcon 1.

He was chairman of the 1949 Worldcon, Cinvention, an associate chairman of Tricon in 1966, and a co-founder of the First Fandom club (and at one time he was the organization's secretary-treasurer). He published Pooka for OMPA which he'd been a member of since 1955. He was one of the associate chairmen of the Cleveland in '66 Worldcon bid.

He was involved in the formation of TAFF and was a fund winner in 1959; his time as TAFF administrator was controversial. His report on the trip, TAFF Baedeker, was published by Lynn Hickman for the First Fandom club, and the Don Ford Fund was set up in his memory.

Don was married to Margaret Ford, with whom he had three children. He died unexpectedly at the age of 44 from cancer, after surgery by none other than Doc Barrett.