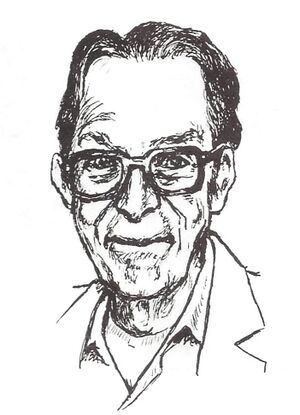 Lynn Hickman. Drawing by Joe Mayhew
from the DSC 50 PB.

Lynn Arden Hickman, a longtime Midwestern fan and huckster from Wauseon, Ohio, founded Little Monsters of America in 1951. He was elected president of the ISFCC later that year.

He was a member of the Midwest Nomads, the Alien Science-Fantasy Club, and was one of the founders of Pulpcon and the founder of the Pulp Era Amateur Press Society (PEAPS). He chaired Illwiscon. He used the pennames of Plato Jones and Arden Cary.

He was publisher of Who Killed Science Fiction? and Why Is a Fan?.

Harlan Ellison called him a “true ‘craftsman’ of the field” of fanzine art in Sol IX.

Lynn and his wife, Carolyn Hickman, were fixtures at Midwestcon. Born in Mount Corey, Ohio, Lynn lived in Mississippi, North Carolina and downstate Illinois before returning to Ohio, where he spent most of his life. A lean, lanky man, Lynn was a chain smoker, he suffered from emphysema, and he ultimately succumbed to lung cancer.

Lynn became active in fandom after joining ISFCC in 1948 and attending Cinvention in ’49, but he claimed to be a member of First Fandom based on a loc he had written on the first, May 1939, issue of Fantastic Adventures, writing in Vega 7 (1953, p. 4): “I didn’t write in to a pro magazine until the first issue of of Fantastic Adventures hit the stands. My immortal words were published and I became a halfway fan.” Unfortunately, there is no evidence of such a letter.

However, page 93 of the third (September) issue of FA features a letter from Keith Hickman commenting on the second (June) ish. George Keith Hickman (January 10, 1923–November 30, 1944), was Lynn’s older brother; a second lieutenant in the 9th Air Force 397 Fighter Squad 368 Fighter Group, he was killed at age 21 in an air crash over Belgium during World War II.

So we are left to ponder whether Lynn misremembered where his early prozine loc appeared, whether he borrowed his sibling’s name as a penname in 1939, or whether, in the ’50s, he took credit for his dead brother’s letter in order to establish his First Fandom bonafides. The mystery deepens when one considers that, in 1959, when Lynn and others founded the club, First Fandom, they set the cutoff date for membership as fan activity by December 31, 1937, on which day Lynn would have been 11 years old.

The brothers were the sons of Pauline and George Edgar Hickman of Napoleon, OH. In 1946, Lynn married Beatrice Stump.