Harlan Jay Ellison was one of the sf community’s most notorious figures. 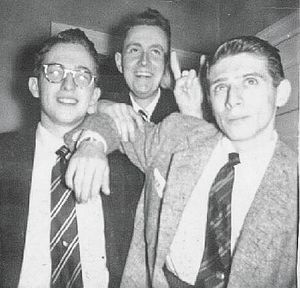 He rallied the Phony 7th Fandomites at HEcon in his apartment and led them, wielding the scarlet Birdbath, to Midwestcon 4. The jeering reception these antics received had him ranting, “The mad dogs have kneed us in the groin...!”

Just about every fan who ever knew him (and some who did not) has a Harlan Ellison Story. Legends have grown around him, such as the Midwestcon Door Incident, the Jellybeans, the St. Louiscon Movie Screen Affair and the savage, sullen, defiant and contemptuous tale of Cheech. He once tried to auction off a pregnant Carolyn Hickman on a street corner in Bellefontaine, Ohio, and he attempted to stop mere fans from being Hugo nominators at Pacificon II. 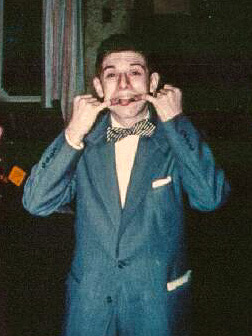 Driving cross country to SFCon, the 1954 Worldcon in San Francisco, with Roger Sims and George Young, Harlan, behind the wheel, made an error in judgment, and they were chased by police. "Change seats!" Harlan ordered. "I don't have a license!" Barreling down the road, with the cops still pursuing, he and Roger traded spots, and Roger was able to talk his way out of the ticket.

Fanzines include Ellison Wonderland (a title he would reuse for a short story collection and as the name of his house in Sherman Oaks, CA), Seventh Fandom, The Kong Papers (with Bill Rotsler), Dimensions, An Invitation, A Statement of Posture (with Al Lewis for FAPA), and Vector (with Jim Schrieber).

In the late 1950s, he started writing professionally and by the ’60s was in Los Angeles area, writing scripts for Hollywood, media nonfiction and sf. His sf quickly established him as one of the most talented short-fiction writers in the field. (At 5-foot-2½, he was a was a short fiction writer, too.) He belonged to the Hydra Club and the MWA.

He was GoH at Iguanacon II, the 1978 Worldcon, where he spent the convention living in a camper because of his opposition to Arizona's refusal to pass the Equal Rights Amendment.

Possibly his most famous project is the (never finished) Last Dangerous Visions.

He was a notorious skirt chaser, and often crude about it. When he grabbed Connie Willis’ left breast on stage at the 2006 Hugo Awards ceremony and later claimed, “there was the slightest touch. A shtick, a gag between friends, absolutely NO sexual content,” this history did him no favors in fannish opinion.

Ellison was frequently abrasive and argumentative, and he generally agreed with that characterization. Despite his own fannish background, he tended to be especially rude to and about fans and fandom. He was also quite litigious. And sometimes violent -- among other incidents, he slugged Charles Platt at the 1985 Nebula Awards.

A good friend of Ellison’s, Robert Bloch, spoke at a roast for him, saying that other people take infinite pains; "Harlan gives them."