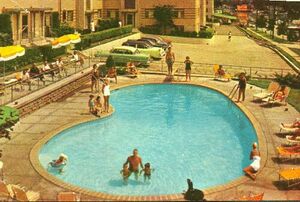 An outdoor pool was a big attraction of many Midwestcons. This is the North Park Plaza in Sharonville, OH.

MWC is a relaxacon — the relaxacon — which has been run each year since 1949 by the Cincinnati Fantasy Group on the last full weekend in June. (The first few Midwestcons were known as the Nth Indian Lake Convention or Inlacon after the site at which they were held.)

Although it has always been held in or near Cincinnati and hosted by the CFG, Midwestcon is considered to be a focal point for Midwest fandom, and regular members take as proprietary an interest in it as West Coast fen do in Westercon or Southern fandom in DeepSouthCon, a fact not always appreciated by Cinti fans.

Midwestcon has long been a destination for smofs, and you are apt to see many more ex-Worldcon chairs there than at almost any other con short of Worldcon itself. And woe betide the Worldcon bid that doesn't throw a bid party at Midwestcon.

Bob Tucker was the perennial toastmaster for many years, even when there was no banquet.