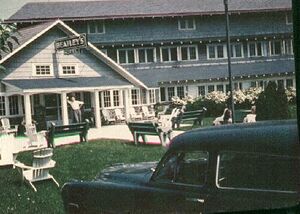 Beatley’s Hotel on Indian Lake, in Russells Point, Ohio (about halfway between Cincinnati and Toledo). The hotel, nicknamed "Beastley's on the Bayou" by Steve Schultheis, was the site of Midwestcon from 1951–1953.

Midwestcon left for reasons which are probably multifactorial. One reason was that three fans were turned away from Beatley's at Midwestcon 4 in 1953 because the proprietor would not rent a room to an African-American fan, Bev Clark, and Buck Coulson and Gene DeWeese left with her. Also, according to Coulson, “Randy Garrett was surprised by the house detective in a compromising situation, there were blows exchanged, and the convention was invited to go somewhere else.” (See Midwestcon 4 for details.)

According to Bob Tucker, writing in Psychotic 15 (September 1954):