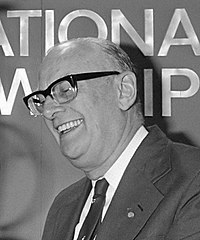 Sir Arthur Charles Clarke, CBE, was a British fan and pro. He was active in pre-war UK fandom and was known as “Ego” “after his most prominent physiognomic feature.” He used the pennames Charles Willis and E. G. O'Brien.

He was GoH at NYCon II.

In the early 1950s, he shared an apartment in London with William F. Temple with whom he co-edited the fanzine, Novae Terrae. He wrote an autobiography, Astounding Days.

Besides sf, he was heavily involved in promoting space flight and in the post-war was chairman of the British Interplanetary Society for many years. His book, The Exploration of Space, won the 1951 International Fantasy Award for nonfiction. Also a science writer with a degree in physics, Clarke is often credited with popularizing the concept for the communications satellite, and the Clarke Orbit is named for him.

Professionally, he began publishing with the short story "Loophole" and went on to publish such classic novels as Rendezvous with Rama and Childhood's End. When approached by Stanley Kubrick to work on a film, they created the movie 2001 and Clarke also wrote the novelization and three sequels. His stories "The Star" and "The Nine-Billion Names of God" are classics in the field.

In 1986, Clarke provided a grant to fund the prize money (initially £1,000) for the Arthur C. Clarke Award for the best science fiction novel published in the United Kingdom in the previous year.

Clarke emigrated from England to Ceylon (now Sri Lanka) in 1956, to pursue his interest in scuba diving. He lived in Sri Lanka until his death.

The first two axioms were formulated by Clarke in an essay, "Hazards of Prophecy: The Failure of Imagination", published in Profiles of the Future (1962); he added the third in a 1973 revision. Any of them may be cited simply as “Clarke's Law,” though it most often applies to Clarke's Third Law.

2001: A Space Odyssey was a 1968 SF movie produced and directed by Stanley Kubrick. The screenplay, written by Kubrick and Clarke, was inspired by Clarke's short story "The Sentinel."

Clarke concurrently wrote the novel 2001: A Space Odyssey, published soon after the film was released.

The film’s main cast was: Keir Dullea as Dr. David Bowman, Gary Lockwood as Dr. Frank Poole, William Sylvester as Dr. Heywood R. Floyd, and Douglas Rain as the voice of the HAL 9000.

Tales of the White Hart[edit]

(Were you looking for the Harry Purvis apazine?)

A series of stories by Clarke in which fans, pros and scientists gathered in a pub to tell technical tall tales. The stories were collected in Tales from the White Hart. "White Hart" is a play on the White Horse where Clarke attended London Circle meetings.

The Exploration of Space was an influential 1951 guide to the possibility of interplanetary travel by Clarke.

Astounding Days, published in the United States in 1990 by Bantam Books, is Clarke's memoirs of his youth in SF, which centers on three prozine editors: Harry Bates, F. Orlin Tremaine, and John W. Campbell. In this 1989 autobiography, Clarke also gives his reaction to the writers and illustrators who first aroused his interest in SF.