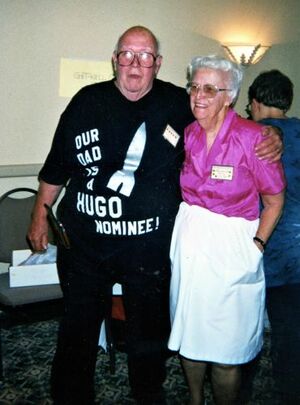 Midwestcon 50 (FanHistoriCon 9), was held June 25–27, 1999, at the Best Western Blue Ash, in Blue Ash, OH, near Cincinnati. Among other events it featured a celebration of Howard DeVore and Margaret Ford Keifer, the two fans who had attended all 50 Midwestcons.

In conjunction, FanHistoriCon 9 was held on Saturday, June 26. It was organized by Ted White (who was unable to attend due to an injury), Roger Sims (who had heart surgery right after Midwestcon) & Pat Sims & Joe Siclari (both of whom seemed fine, thanks!).

(This last panel had a dramatic moment when Ed Wood, a noted collector, stood up and dramatically announced that he was not going to pass his collection on to anyone. It made sense only in the context of his life and when he died he was going to have it burned as a funeral pyre. He then stalked out of the room. (Ed was given to the occasional bit of drama.))