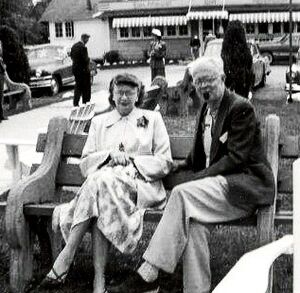 Frances and Charles Tanner at Midwestcon 3, 1952.

Charles Roland “Charley” Tanner, Jr., a Cincinnati fan and pro, was one of the founders of The Hell Pavers, which became the CFG (see also Founding of CFG).

He wrote professionally before World War II. His first sale was in 1930 in Science Wonder Stories. Probably his most famous work was the "Tumithank of the Corridors" series.

He was married to Frances Tanner; they had three children. He served as a private in the Army in World War I. In mundane life, Charley was a color technician for Formica Corp. He retired in 1961 and the Tanners moved to California. He is buried at Los Angeles National Cemetery next to Frances.