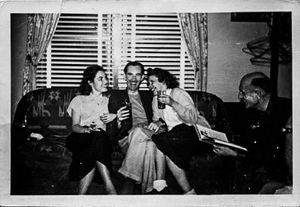 Midwestcon’s precursor was held September 9–11, 1949, in Doc Barrett's summer cottage on Indian Lake in Ohio. Sometimes called Midwestcon Zero, it was "an impromptu gathering hastily arranged at the end of Cinvention" and no one knew that it would turn into a continuing convention.

Yes, Kiddies, there really was one, even if it didn't have the name. Remember, the Cincinnati Fantasy Group started cold and one year later, put on the Cinvention. It was a real rat race.... As the convention committee, we were far to busy to visit with our guest of honor, Ted Carnell.


The following weekend, Ted was visiting Doc Barrett at his cottage at Indian Lake, Ohio. Doc invited the ConCom and a few other Ohio fans to the lake and we got to visit with Ted. That was so much fun, we decided to do it again and the Midwestcon was born.


That was a half century ago and MWC still happens the last weekend in June. It is the original relaxicon. A weekend long bull session, with no panels and no programming beyond a buffet where some BNF get introduced.