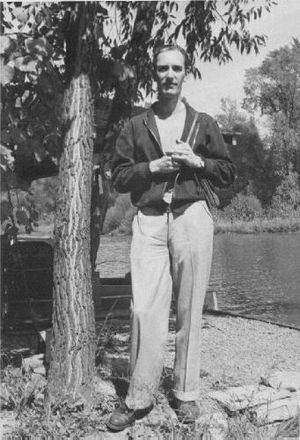 In 1949, he was the recipient of the Big Pond Fund, the first fan fund, to bring him to the Cinvention where he was Fan GoH. A CFG post-con party for him at Doc Barrett’s place on Indian Lake, Ohio, was the origin of Midwestcon.

Carnell was a member of the London Circle. He chaired the first UK Worldcon, Loncon, in 1957.

Before the War, he took over the fanzine Novae Terrae and renamed it New Worlds, using Pendulum Publications as a publishing house name. After four issues he attempted to turn it into a prozine, but failed because the publisher he was working with turned out to be a crook.

After the War, he was successfully founder and first editor of a New Worlds prozine. He also edited Science Fantasy starting in the 1950s and then started the long-lived New Writings in Science Fiction anthology series.

He was a member of the International Fantasy Award judging panel. He published Postal Preview, Sands of Time (which appeared in the Futurian War Digest), and the apazine, Creep, Shadow!. He was was on the committee of Festivention and London SF Con and was GoH at London, the 1960 Eastercon.

He was married to Irene Carnell.