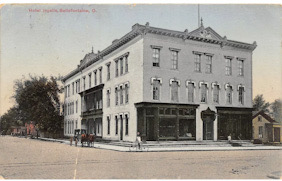 Bellefontaine is a city in Ohio, about 48 miles northwest of Columbus. It is fannishly known as the hometown of Doc and Evelyn Barrett in the 1950s and the site of some early Midwestcons. The Hotel Ingalls, where the Door was infamously broken during Midwestcon 5, was located there.

It’s about 12 miles from Indian Lake, where the Barretts had a summer home at which they entertained fans during Midwestcon 0 and Midwestcon 1, and where Beatley's Hotel in Russells Point, OH, another Midwestcon venue, was located.