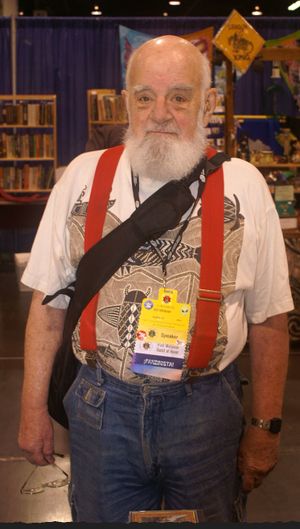 Big, bearded Arthur L. Widner, Jr., aka “yhos” (“your humble and obedient servant”; when signing or referring to himself, he used lowercase) and Arlawi, was one of the founding members of The Stranger Club, the pioneers of Boston fandom. He often signed his name with a variation of R. Twidner (R! Twidner).

He chaired Boskone I and Boskone II (1941 and 1942), the first two Boston SF conventions. He was one of the five people attending Boskone IV and of the three at Mainecon in 1943, where the spelling fen was "unanimously resolved."

Widner appeared in the 1940 Worldcon masquerade as Giles Habibula (from Jack Williamson's Legion of Space), his costume constructed from “Pogo’s hat, Trudy Kuslan’s pillow, and an anonymous bar-tender’s wine bottle.” He returned in 1941 as “Old Granny” from Slan.

In 1941, he organized a car pool from the East Coast to Denver for Denvention, a very adventurous undertaking in those days, which was immortalized as the Widneride. (He was an old practitioner of the ancient fannish practice of naming cars, having driven the Skylark of Foo, the Skylark of Woo-Woo, and the FooFoo Special (and he published Cruise of the Foo Foo Special). In his younger days, he was reported to be Built Like a Gorilla.

He gafiated about 1948, becoming revenant in the late 1970s, and resuming pubbing YHOS after a gap of 34 years.

He published over 160 fanzines, the longest running of which was YHOS (1940–45 and 1979–2001 for FAPA). He helped to published The Stranger Club fanzine Fanfare. He also published Quaro for SAPS. His publishing house was Bodacious Publications.

He helped found the N3F edited Bonfire in 1941 and 1944, and was president in 1947. He published Poll Cat. He investigated the Pseuicide. He was a member of the FAPA Brain Trust.

His single prozine sale, “The Perfect Incinerator”, appeared under the name Arthur Lambert in the December 1942 issue of Robert Lowndes’ Science Fiction Quarterly.

Karen Cooper and Minicon 25 published Remember When in his honor in 1990 and in 1998, the tributezine Art Appreciation was published by Andy Hooper in his honor. ArtCon and ArtCon Millennium Edition were held in his honor. He was a longtime member of FAPA and, in 2014, was made its first (and so far only) Life Member. On August 19, 2011, while attending a birthday party for Randy Smith at Renovation, he claimed to be the World's Oldest Living Fan.