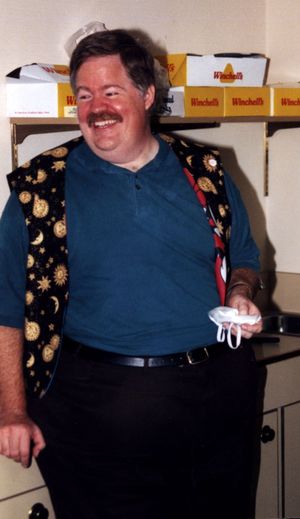 An LA-area fan editor and publisher of the long-running fanzine File 770. Glyer started File 770 in 1978 to report on clubs, conventions, fannish projects, fans, fanzines, awards, and to publish controversial articles.

In 2008, both Glyer and his then-wife Diana Pavlac Glyer were nominated for Hugo Awards: File 770 for Best Fanzine and The Company They Keep: C. S. Lewis and J. R. R. Tolkien as Writers in Community for Best Related Book.

Glyer has been active in LASFS since 1970, frequently serving as an officer, especially club secretary. He won DUFF in 1979, but was forced to withdraw due to work commitments for his job at the IRS. Glyer was made a Fan GoH for the first time at the 1980 DeepSouthCon in Atlanta, partly because the con committee thought his LASFS minutes were so amusing that they had to be made up. Glyer protested that funny things were happening all round him and he just wrote them down – rather like Vincent Van Gogh claiming "I just paint what I see." He is a member of First Fandom, FAPA, SCIFI, and the Mythopoeic Society. He was a Rotsler Award judge from 1998-2004.

In 1972, Glyer and Elst Weinstein held the first Hogu Awards Ranquet, giving out hoax awards inspired by a typographical error on a Hugo ballot.

His one professional fiction sale appeared in the book Alternate Worldcons, edited by Mike Resnick. That short story, "The Men Who Corflued Mohammed," is an homage to Alfred Bester's "The Men Who Murdered Mohammed."

He was the editor of the Worldcon convention newsletters The Daley Planet at Chicon IV in 1982 and Scuttlebutt at ConStellation in 1983, and of the Worldcon concom letterzine Rattail File for L.A.Con II in 1984. He curated the Contemporary Fanzines Exhibit on the Concourse at Noreascon 3, the 1989 Worldcon. He was on the concom for Corflu 9 in 1992.