Special memories from Connie include the steam-bath temperatures and humidity in the convention center during set-up (it charged for air conditioning, and the committee had not paid for A/C at the start). Another is the Crab Feast/Hugo Banquet, which showed the error of giving 1,100 fans mallets (for opening crabs) and then not serving them fast enough...

The Longship Company, part of Markland Medieval Mercenary Militia had a replica Viking longship, the Fyrdracca in Baltimore harbor all weekend, and even pulled alongside the crippled meet-the-pros cruise with chants of "publish or perish!" to offer a ride. By arrangement with NESFA Press, Connie published A New Settlement of Old Scores to honor GoH Brunner.

Baltimore in '83 won over competing bids Australia in '83 and Worldcon Scandinavia in 1983 at the 1983 Site Selection. 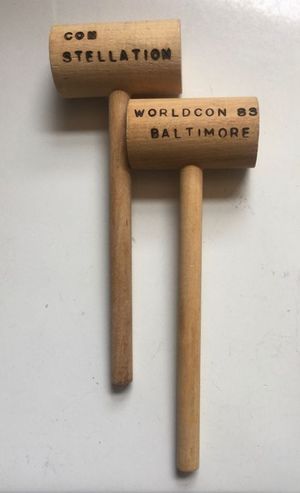 At a Baltimore crab feast, the diners usually sit at a table covered with butcher paper holding a wooden mallet, a knife and a fork -- and dissect crabs from a pile in the center of the table. The crabs have been steamed with crab seasoning -- salt, mustard, red pepper, celery, paprika, black pepper, thyme, ginger, laurel, mace, cinnamon, and other spices. The only difficulty with a crab feast is that the crabs actually have no meat at all in them, so there's a lot of pounding and dissecting and searching to get a meal. (The banquet also included hamburgers, hot dogs, chicken and corn on the cob.)

(NB: Eva here, who ran the crab feast: Actually, crabs do have meat, and crab feasts are leisurely affairs most often accompanied by pitchers of the local bheer. It's less an occasion to stuff one's self, and more an opportunity to relax with friends and family. The meat is best accessed using a small paring knife to get into the compartments within the shell.)

At Connie, there were an 1100 people who paid for the banquet, or were guests of the convention. The meal went as smoothly as it probably could have, all things considered. It was only afterwards that the Fatal Flaw in the plan was discovered. In File 770 44, p. 18, Mike Glyer recounts:

(Eva here again: even with instructors and detailed directions on how to eat the crabs, I suspected giving the eaters just a knife to eat the crabs would cause frustration. The fans sitting at the Philadelphia Science Fiction Society (PSFS) started banging their mallets while waiting for the hall to fill with all 1,100 people to file in and find their seats. Others joined in the din for a few minutes, but after just 5 minutes Jack Chalker signaled for people to stop, and like a switch, it stopped.)

Unfortunately, the Diamondvision was very expensive and ... well, was — uh — sortof was not in the budget, but was rented anyway because of poor information from the treasurer. It was the most visible contributor to the Constellation Bankruptcy, and it became the poster child for Connie’s profligate spending and bad management. (In fact, the major deficits can be traced back to overspending by the Con Suite, Registration, office supplies — the department head took everyone's requests for the supplies and promptly bought three times that amount — and other departments. The Crab Feast made a small profit, and the Huckster Room also finished in the black.)

Fandom's reaction to getting more than their money's worth was predictable, with much finger-shaking, alarm and despondency, and expressions of dismay. It was the talk of fandom. The second-guessing (especially by people who shared the Columbus Cavalry's approach to con-running) seemed endless and got to the point where the following year at LAcon II there was a very funny masquerade entry skit of smofs going on about it while wearing t-shirts which read "Blah, blah, blah, fiscal responsibility. Blah, blah, blah, Diamondvision.")