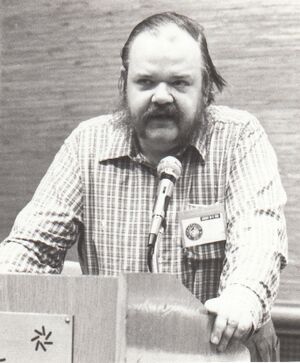 Jack Chalker at the Mimosa Live event at Chattacon 13 in 1984. Credit Rich Lynch.

Jack Laurence Chalker, a long-time Baltimore area fan, fanzine publisher, and later pro, discovered fandom in 1957. In his early fannish life, he was a member of the N3F and the SFG.

He was active in local fandom, a member of WSFA and one of the founders of BSFS (of which he was many times an officer) He co-chaired Disclave 26 with his wife, Eva Whitley, and Balticon 2, Balticon 3, and Balticon 4. He was Vice-Chair of Discon II and chaired the Baltimore in '67 bid. He was part of the Philadelphia in 1977 Worldcon bid. He chaired Lunacon 18.

He was twice nominated for the Hugo: the 1963 Best Fanzine Hugo for Mirage (at age 18) and the 1992 Best Non-Fiction Book Hugo (with Mark Owings) for The Science-Fantasy Publishers: A Critical & Bibliographic History (they also received the 1992 Readercon Award for it). With Owings, he wrote The Revised H. P. Lovecraft Bibliography (1973).

He was a member of SAPS and of FAPA (Viewpoint was his FAPAzine). He published the fanzines Mirage (which was also called Centaur and Kaleidoscope early in its run), Qasar, and Interjection. He also published Ibex, and Everyfan's Guide to the Auctions.

He had a 30-year career as a popular sf writer, writing over 50 books, and was nominated for the 1977 Campbell Award and the 1978 Campbell Award. He was treasurer of SFWA for three terms.

He may have been first to use the initialism SMOF and might be the youngest person ever nominated for a Hugo Award.

In 1961, Chalker founded and operated Mirage Press, a small press named after his fanzine. After Chalker's writing career became successful, Mirage Press went dormant other than publishing a number of supplements to The Science-Fantasy Publishers.