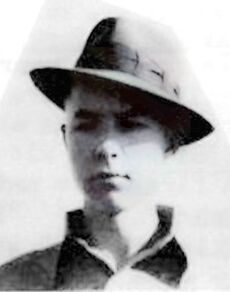 LeRoy Homer “Roy” Tackett, also known as “Horrible Old Roy Tackett” (“HORT”) — he was anything but — and as “RoyTac,” had his first contact with fandom in 1936 when, as a kid living in rural Colorado, he started corresponding with other fans.

In 1941, he wrote to Le Zombie asking about alphabet societies, asking "who started this alphabetical drivel and why wasn't he shot?" Tucker took the straight line and blamed it, deadpan, on "some fan whose identity is now lost to history [...] Could the original scoundrel be found, he doubtless would be shot."

He was in the Marines during World War II and upon returning to the US he became active in fandom on the West Coast, attending the first LASFS Fanquet, in 1945 and was active in Bay Area fandom in the late ’40s and early ’50s and was a member of the Golden Gate Futurian Society and the Little Men. He was a member of the ISL.

During the early ’50s, Tackett was a Marine Corps drill instructor at Parris Island. By 1960, he had pretty much gafiated for around eight years, when he discovered a review of the Coulsons' Yandro and sent off for a copy; Buck wrote back, asking if Roy had anything in his files they could publish, so Roy dug something out and sent it to them; as Roy later remembered, "The itch won out. I was back in fandom, and I never left it again."

He was credited with the introduction of fandom to Japan in the ’50s when, back in the Marines, he was stationed there. He retired from the Marines in 1962 with 20 years of service and settled in Albuquerque. "As far as I knew, there wasn't any stf activity in Albuquerque, so I did the only thing that was possible: I took out ads in the SF magazines asking for anyone interested in forming a stf club to contact me. I got letters from Chicago and Boston, but nary a nibble from Albuquerque."

Nevertheless, he did found Albuquerque fandom after a chance meeting at a used bookstore with Robert E. Vardeman -- they were both reaching for the same copy of Analog. With Eugene Casey, they founded the Albuquerque SF Society and went on to co-found Bubonicon.

Roy produced more than 100 issues of his fanzine, Dynatron during the 1960s, and won TAFF in 1976 (his trip report was titled Tackett's Travels in Taffland).

Roy was the Fan GoH at the 1997 Worldcon in San Antonio, TX, where Mojo Press released his selected fan writing, The Least Horrible of Roy Tackett.

Roy got the fannish nickname of "HORT" in the early ’60s, hung on him by Bruce Pelz. It was an initialism for “Horrible Old Roy Tackett,” which Roy was anything but; when anyone heard Roy called that, the accepted response was supposed to be, "Oh, I know Roy Tackett and he's not that old!" 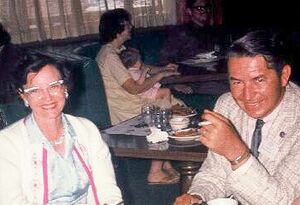 He died in 2003 of heart failure brought on by years of heavy smoking, and was buried in the Santa Fe National Cemetery along with his first wife, of over 40 years, fellow Marine Chrystal Tackett (1923–1989), whom he married in 1951, and Eleen Tackett, his second wife. In 2008, fellow fan, and long time friend Jack Speer was buried nearby.