(For other "Philcons" see Philcon (Disambiguation).) 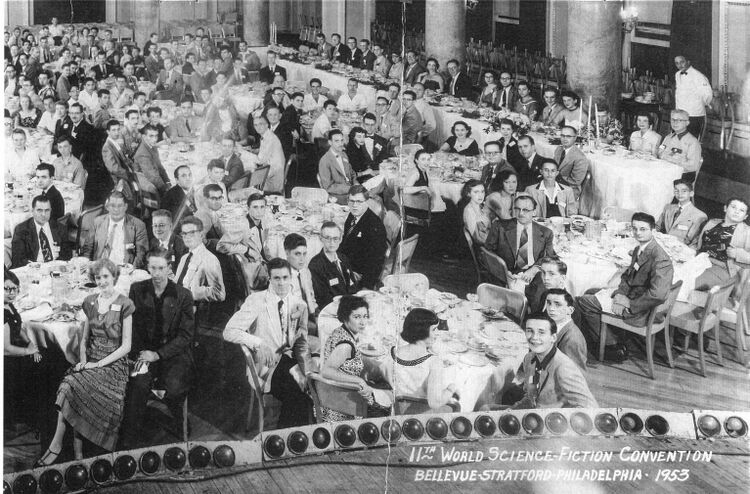 The 11th Worldcon, held September 5–7, 1953, at the Bellevue-Strafford Hotel in Philadelphia, Pennsylvania, was officially known as "The 11th World Science Fiction Convention," but it was popularly called Philcon II and that's how it is remembered.

The GoH was Willy Ley and Isaac Asimov was Toastmaster. It was chaired by Milton Rothman, who replaced James A. Williams, the original chairman, upon his death. Tom Clareson was Vice-Chairman.

Tetsu Yano became the first Japanese fan and pro to attend a Worldcon at Philcon II, due to the efforts of Forry Ackerman’s Project: East Meets West.

There was some ill-feeling during the 1953 Site Selection at Chicon II, when the spur-of-the-moment Philadelphia bid (see The Story Behind Philly in '53) beat a San Francisco bid for the con. This led to the adoption of the rotation plan. Other bidders were Cleveland in 1953, Indianapolis in '53, Queens SFL in '53, and Niagara Falls in '53.

Because so many fans felt that Philly had unfairly taken the 1953 Worldcon from San Francisco, in the 1954 Site Selection, they awarded them the 12th Worldcon -- in spite of there being no San Francisco bid and only one San Francisco fan at the convention: and he wasn’t there at the time!