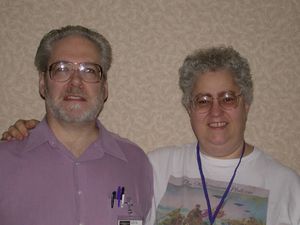 Donald E. Eastlake, III is a long time Boston-area conrunning fan who is married to fellow fan Jill Eastlake. They moved to the Orlando-area in 2018 and remain there. He was an early member of NESFA and served three years as its president. He was also a Trustee of the NESFA Lunar Realty Trust #1. He was elected Fellow of NESFA in 1976. He has worked on many regionals and Worldcons. He co-chaired Boskone 11 and chaired Boskone 16. He was a member of MCFI and was one of the founders of the Boston Convention Engineering Corporation (BCEC) and led its Boston in 1998 Worldcon bid. He has served numerous times as chairman of the WSFS Business meeting. He was instrumental in the formation of the MPC, the initial registration of WSFS trademarks, and still serves on the MPC.