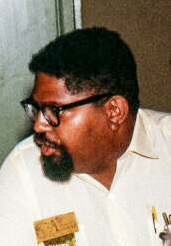 Elliot Kay Shorter, a well-loved New York and Providence area fan and huckster, won TAFF in 1970 and was Worldcon GoH at Heicon.

He tended to stand out in fannish circles. A 6'4" tall and ex-Army MP, he was often mistaken for pro-football player Rosie Grier.

Shorter was involved in the Society for Creative Anachronism, which he joined in 1968 and where he went by the name "Master El of the Two Knives". He was one of the founders of Locus, serving as an assistant editor starting with issue 9.

After Harlan Ellison collected more money than was necessary at St. Louiscon in the wake of the St. Louiscon Movie Screen Affair, Shorter objected ("Just a gosh-darned minute, Harlan!") to Ellison's unilateral announcement that the extra money would be donated to Clarion Writers Workshop. Instead, the money was used to start a Worldcon Emergency Fund.

He was a member of the NYCon II committee and served as Sergeant-at-arms for the WSFS Business meeting. He helped run SunCon, as he was part of the 7 in '77 Worldcon bid. He was a member of the Tolkien Society of America, the Hyborian Legion, ESFA, the Lunarians, the Fanoclasts, NESFA and the City College of New York SF Club (where he worked on Engram). He was an original Fellow of NESFA.

Shorter participated in the fannish musical Back to Rivets at Boskone 14 in 1977 and appeared two years later in The Decomposers.

Shorter ran for and won TAFF in 1970, beating Charlie Brown and Bill Rotsler, and traveled to Germany for the 1970 Worldcon. Heicon '70 had announced that their Fan GoH would be whoever won TAFF, and Shorter was thus honored at the convention.

At Heicon, the formidable Shorter (though no one ever saw him actually be violent) noticed that the Heicon committee had neglected to arrange for seats at the Hugo Banquet for fellow GoHs Robert Silverberg and Herbert Franke. Silverberg and Franke were unable to get the committee's attention, whereat Shorter rose up and at full volume brought the issue to everyone's attention. They were quickly seated. According to some reports, he was the primary defender at the Battle of the Balcony at Heicon.