(Did you mean the Australian NatCon?)

The 1977 Worldcon held September 2-5 at the Hotel Fontainebleau, Miami, FL. GoH: Jack Williamson, FGoH: Robert A. Madle. It was chaired by Don Lundry and Robert Silverberg was toastmaster.

SunCon was bid by "7 for '77", a group of well-known con-runners who promised that if they won they would then select an ideal site. It won against four other active bidders -- see 1977 Worldcon Site Selection for details.

The 7 for '77 committee selected a hotel in Orlando, Florida, which subsequently went bankrupt. On the grounds that the bankrupt hotel would not honor the contract, SunCon subsequently moved to a classic hotel in Miami Beach, the Fountainbleu -- which then also went bankrupt. This didn't help a committee which was also suffering from exceptionally bad publicity -- Locus was positively sarcastic in its reporting of Lundry's lack of forthright responses to questions.

The 7 for '77 proved unable to work effectively together and one after another the members resigned or were pushed out, ultimately leaving Lundry alone and a convention with a bad reputation. See the Stuncon membership card for an amusing take on this.

Not all of the convention's problems were the committee's fault. To date, SunCon is the only Worldcon where it has rained in the art show (which probably helped to explain the mildew on the walls). (A tropical storm passed over Miami during the con. While not terribly windy, it released deluges of rain which, among other things, helped to locate many leaks in the somewhat decrepit hotel's structure.) It was also the subject of an unsuccessful SunCon Boycott proposed by Marion Zimmer Bradley.

Its convention newsletter was The Sunbeam. 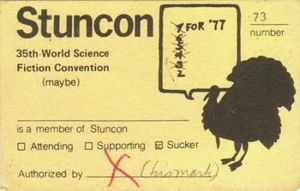 There was considerable friction among the leadership, and one by one, most of the original Seven quit, leading to the hoax membership card pictured.

Shortly before SunCon, Marion Zimmer Bradley proposed that fandom boycott the convention because Florida had not ratified the ERA and Miami had repealed a gay rights law.

This may have been a harbinger of a much louder (though also unsuccessful) campaign against Iguanacon the following year.