(Did you mean a Andrew C. Neale fanzine?) 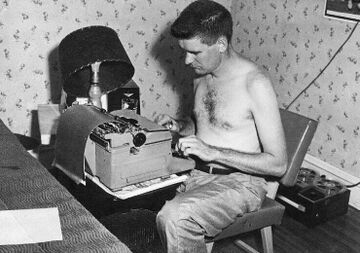 Bob Tucker at the typer in his fan den in the mid-1950s. Photo by Bob Madle.

The typer, short for typewriter (or tripewriter), was a fascinating kind of entirely mechanical wordprocessor used widely in fandom until the 1990s.

The archaic device was used by legendary olden-time fen for writing everything from letters to fanzines. Today's computer users would recognize the basic primitive keyboard as being the same general configuration as that used on a computer, except the typer's lacked function keys, numbered key pad, most alternate purpose keys and programming functions, and the only purpose of the "shift" key was to change from lower to upper case. (The "upper case" numbers are symbols, pretty much just as they are on a proper modern keyboard.)

Typer keys were hit with sufficient force to cause them to strike a moving ribbon (sometimes of carbon paper, sometimes of ink-impressed cloth) which in turn hit the paper and left its impression on the page, making revision difficult. But the advantage of typers was that they were excellent mates to the primitive mimeographs and spirit duplicators, in that the ribbon could be removed or disengaged so the keys struck a mimeograph stencil (it could be left on to strike a Ditto master) with sufficient force to make the kind of impression needed to cause the stencil or master to work properly.

Some of the very earliest typers were not even electrically powered but rather were operated solely by means of manual force. It is possible, however, that this may be one of those "fanciful tales" which old-time fans are reportedly prone to tell neos to make them feel inferior.

The name is believed to derive from "*twyprroo" the "action of beating on hollow logs to communicate" in proto-Bengali.

In theory, typer could apply to whatever sort of keyboard you type on, but the term did follow fans to word processors, let alone computers.