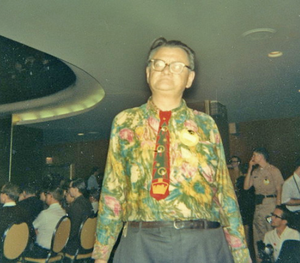 Elmer Perdue (aka Ephless El, li'l Elmer and 520 07 0328) was an early and longtime fan. He was host of the Caspercons in Wyoming during World War II, and a member of the Washington Worry-Warts. He had a Fine Mind and was famous for loud neckties.

He was active in FAPA, and a member of the Washington Vigilante Three during the Philadelphia Blitzkrieg (though, ironically, he was the inactive OE who was pushed out of office in the late ’40s by the Insurgents), publisher of FAPAzine, member of the Order of Dagon and the Brain Trust. He was a defender of Yngvi. He was a charter member of the National Fantasy Fan Federation in 1941.

He played piano. He briefly dated Morojo after he moved to LA and she broke up with Forry Ackerman. He was married to Betty Perdue; they lived in Tendril Towers in LA and belonged to LASFS. 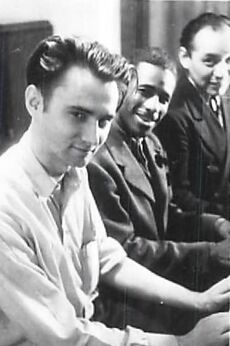