(Do you mean the Ackerman fanzine Yngvi or Yngvi Is a Louse! and Other Graffitos, Toni Weisskopf’s fanzine?)

“Yngvi is a Louse!” is shouted each hour by a demented prisoner in Surt's dungeon in L. Sprague de Camp and Fletcher Pratt's novella "The Roaring Trumpet" (the start of the Harold Shea series), which was first published in the May 1940 issue of Unknown. No one knows what it might mean, or who Yngvi might be. It quickly became a fannish catchphrase, appearing as early as the June 1940 issue of Le Zombie.

As Eney notes below, the name Yngvi originates in Scandinavian mythology. E. R. Eddison used it in Mistress of Mistresses (1935):

At the Denvention, Rothman made a motion to the effect that Yngvi is not a louse, but it was defeated. A motion was then passed stating that Rothman was a louse. 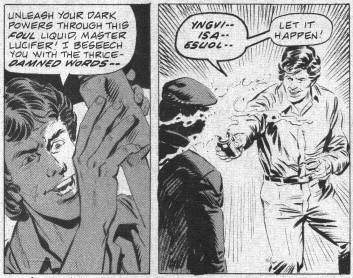 The phrase makes an appearance in the 1973 Marvel comic "The Death-Dealing Mannikin" by Kit Pearson and Tony Isabella, when a villain uses the incantation "YNGVI—ISA—ESUOL". The same story also mentions DYKTAWO as the name of a demon.

At the 2012 Worldcon, Chicon 7, a motion was made at the WSFS Business meeting that "Yngvi is not a louse". The p/e/r/p/e/t/r/a/t/o/r/s/ makers of the motion even conducted a small-scale campaign including ribbons and bookmarks. In spite of that, the business meeting voted decisively against the motion, leaving poor Yngvi still a louse. Ribbons also appeared designating Deb Geisler, Michael Benveniste, and Geri Sullivan, the makers of the motion, as lice, although no motion making that claim was made.