From Fancyclopedia 3
(Redirected from Andrew I. Porter)
Jump to navigation Jump to search 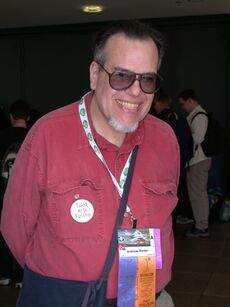 Andrew I. Porter at Interaction in 2005. Photo by Mark Olson.

He became active in fandom in 1960, in NY fan groups including the Lunarians, FISTFA (the Fannish and Insurgent Scientifictional Association) and the Fanoclasts, then hosted by Ted White. In 1960, he had his first news-related column on upcoming paperbacks, printed in James V. Taurasi's Science Fiction Times. He has also been a member of the N3F, British SF Association, LASFS, BCSFA, SFWA, HWA and others.

He edited and published the very long-lived semiprozine Science Fiction Chronicle from 1979. He also published the major fanizne Algol (later renamed Starship.) He has been a member of FAPA, TAPS, SFPA, APA-F, and APA-L.

He was a member of the NyCon3 committee, the organizer of the Montreal in '77 Worldcon bid, and ran unsuccessfully for DUFF in 1972.

He sold Science Fiction Chronicle to DNA Publications in May 2000 and was fired in 2002.

In publishing, he was a proofreader and copy editor, was assistant editor on The Magazine of Fantasy & Science Fiction from 1966–74, associate editor at the paperback publisher Lancer Books in the late 1960s, and was a trade magazine editor and advertising production manager on such titles as Rudder, Quick Frozen Foods (under editor Sam Moskowitz), QFF International, Construction Equipment, and Electro-Procurement.

He was editor/designer/publisher of The Book of Ellison, a hardcover/trade paperback published to honor Harlan Ellison's 1978 stint as Worldcon Pro GoH. He has sold articles and photos to Publishers Weekly, Omni, and The New York Times.

His other publications, under his small press Algol Press imprint, are:

Born in Detroit, Michigan, Andy moved to New York City with his mother and brother in 1956 upon the death of his father the previous year. His name was legally changed in 1964 when his mother remarried. A bachelor, he has been a New York City resident ever since.

In 2006, he was diagnosed with liver bile duct cancer, for which he was operated on successfully in 2007, followed by five months of chemotherapy. He is now cancer free.