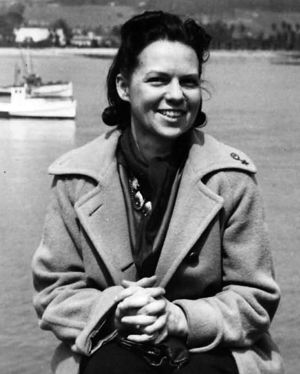 Myrtle Rebecca Douglas, known by the Esperanto nickname Morojo, was one of the founders of fandom, and its first costumer.

She appeared with 4E at Nycon 1, the first Worldcon, dressed in futuristicostumes that Morojo designed and crafted. The next year, at the Chicon, the pair performed a skit from Things to Come in Morojo-made costumes. These appearances led to the masquerades at later cons and, ultimately, to the cosplay phenomenon.

She described herself as "Small, dark and moody." She became interested in sf around age 12 when her brother gave her a copy of A Princess of Mars. She was a member of the SFL, New Fandom, the Science Fictioneers, and the Sacred Order of FooFoo.

She published a one-shot, Stephan the STFAN, to distribute at Nycon, where she tried to convince the Triumvirs to reverse their Exclusion Act against the Futurians.

Despite being so bitterly angry with Morojo after their breakup that he barely spoke to her for the rest of her life, Fojak wrote, "I remember Morojo as the greatest female fanne who ever lived" (but later hedged and said Bjo might have surpassed her).

According to Robert Lichtman, "Her Room 689 at the first Chicon in 1940 was legendary in much the same way Room 770 was a decade later.... She was an important early fan, one of the first women in fandom prominent on her own (despite the Ackerman connection)." She was a cousin to Pogo, another prominent early femmefan and Esperantist.

Morojo gave lessons in Esperanto and actively participated in the Esperanto movement. She nicknamed her son, Virgil Douglas Smith, Vodoso.

She was an active member of LASFS, serving as its treasurer, as well as cutting most of the stencils and doing the mimeography for its clubzine Imagination, which won the 1939 Best Fanzine Retro Hugo. According to Ackerman, "She fought the good fight in the horrid days when the club was being crucified by the Knanves (the Insurgents, the Laney gang)."

In the 1950s, Morojo published the FAPAzine Guteto, which was dedicated to promoting Esperanto.

She married her last husband, Johnnie Nolan, in 1954. According to Elmer Perdue, the couple shared a love of the outdoors and of the nudist movement, and went to live in the high desert of California, but Perdue, who briefly dated Morojo in the mid-1940s, didn't think much of Nolan as a husband.