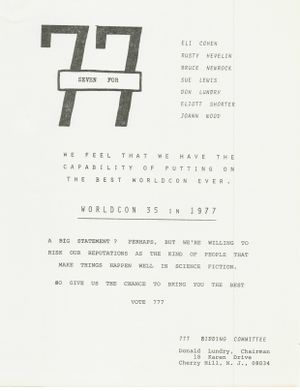 Seven for '77 was a bid for the 1977 Worldcon where the bid committee (Don Lundry, Elliot Shorter, Eli Cohen, Rusty Hevelin, Bruce Newrock, Sue Lewis, and JoAnn Wood) offered itself as an experienced group of con-runners who would not be bound to a specific city, but would locate a first-rate site and negotiate a good deal. In mid-1974, they were looking at Boston, Atlanta and Orlando. By January 1975 (six months before the vote at Aussiecon I), they had selected the Sheraton Towers Hotel in Orlando, FL as their venue and billed themselves Orlando in 77.

Its competition was Montreal in '77, Washington in '77 and Philadelphia in 1977. They won at Aussiecon I, see 1977 Worldcon Site Selection.

Unfortunately, the hotel they selected went bankrupt and in early 1976 the committee was forced to move the convention to the Hotel Fountainbleu in Miami Beach, FL where they ran SunCon.

The group proved unable to work effectively together and one after another the members resigned or were pushed out. See the Stuncon membership card for an amusing take on this.

Read Dave Kyle's SunCon Reminiscence for some more on this bid and the aftermath.