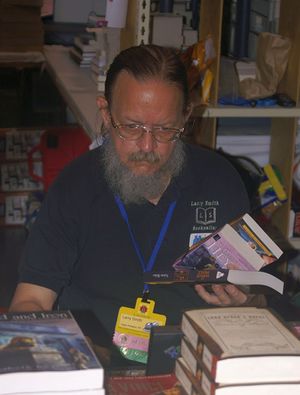 (Did you mean the Larry Smith from San Francisco?)

Laurence C. Smith was a long-time Columbus fan who co-chaired the Columbus in 1976 Worldcon bid, chaired Marcon III-XII, and was a vice chairman of Chicon IV. He co-chaired OVFF 14 in 1998 and World Fantasy Convention 2010. He was a member of NESFA, CFG, and SFWA. He was one of the founders of the Central Ohio Science Fiction Society and edited its clubzine Cosign for 12 issues in 1966 and 67. He was one of the members of the Columbus Cavalry and a member of the Seattle in 1981 bid.

He was closely associated with Bob Hillis.

In the early 1990s, he and his second wife, Sally Kobee, went into business as hucksters at SF conventions by purchasing Dick Spelman's business when Spelman retired, and they became major figures in that niche. He managed the huckster room at too many Worldcons to enumerate.

On September 10, 2015, Smith was hospitalized when his van overturned in Tennessee on his return to Columbus from Atlanta, where he had been dealing books at Dragon*Con. The Smiths' vehicle was totaled, but fans stepped in to help Smith recover his inventory and purchase a new van. 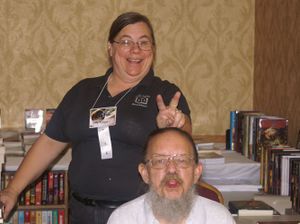 He published Ethereal Vibrations for SAPS.