Difference between revisions of "The Cult"

A former member is an Exult. Gatherings of Cult members were called Seances.

The Cult was a "rotational" apa –- a rota of publishing members took turns publishing the Official Organ, which may have an individual title but was always subtitled Fantasy Rotator. The schedule was one issue every three weeks (so the individual publishing member only had to publish one FR every 39 weeks). Postmailings were called Fractional Rotator. 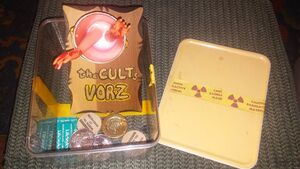