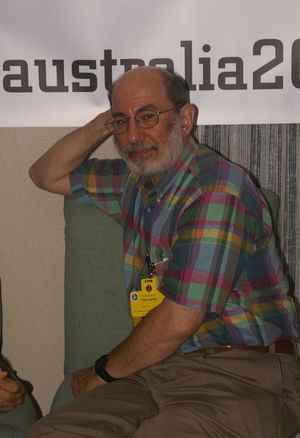 Frederick Andrew Lerner is a librarian, bibliographer, and historian, who has also written extensively on modern SF. He has been active in Fandom since December 1962, when he met Carl Frederick who introduced him to the Evening Session Science Fiction Society of City College. During the next few years he joined the Eastern Science Fiction Association, the Lunarians, and FISTFA. His attended his first World Science Fiction Convention, Discon, in 1963.

He has been a member of FAPA (producing Lofgeornost), TAPS, MinneAPA (producing Green Mountain Boy), N'APA (producing The Sociable Grossbeak, and The Cult (producing Hindiwala). He founded the Fantasy and Science Fiction Society of Columbia University, co-founded the Beaker People Libation Front, and was one the founders of the Science Fiction Research Association. He was co-chair (with Brian Burley of the New York in '74 Worldcon bid.

While a student at Columbia during the early 1960s he produced “Exploring Science Fiction”, a monthly series of interviews with SF writers and experts for WKCR-FM, the college radio station. Some of the interviews (John Campbell, Frederik Pohl, and James Blish are available at the fanac.org website.

He holds a doctorate in library science and has consulted and lectured on the indexing of SF literature. He published An Annotated Checklist of Science Fiction Bibliographical Works in 1969 in connection with the Conference on the Bibliography of Science Fiction which he organized at Columbia University. His book Modern Science Fiction and the American Literary Community (Scarecrow Press, 1985), is a study of SF's changing reputation in America and was based on his doctoral dissertation. A Bookman's Fantasy, published by NESFA Press in 1995, is a collection of his essays, many drawn from Lofgeornost and Niekas. He edited A Silverlock Companion: The Life and Works of John Myers Myers (Niekas Publications, 1988), which was later incorporated into the NESFA Press (2004) edition of Silverlock, and two volumes of fan memoirs: After All These Years…Sam Moskowitz on His Science Fiction Career (Niekas Publications, 1991) and Fancestral Voices by Jack Speer (NESFA Press, 2004). He is also the author of The Story of Libraries (Continuum, 1998; 2nd ed., 2009) and Libraries Through the Ages (Continuum, 2001).