Frederik Pohl was one of the most active early fans, a creator of fandom-as-we-know-it, who remained a fan until his death. In a professional career spanning over 75 years, he was one of the major professional writers and editors in the field, as well as an influential literary agent.

He found sf in 1928 and formed an sf discussion group in grammar school in 1932. In the 1930s, while in his teens in New York, he helped to found the Futurians and, after Don Wollheim and John Michel, may been the most influential fan in that faction of fandom. He promoted a Futurian Federation of the World. He was one of the Quadrumvirs. 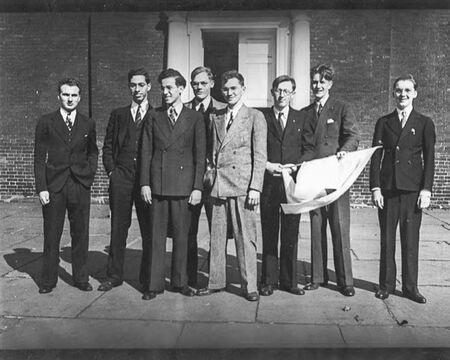 He attended the First Convention, hijacked an elevator at the Third Eastern Convention and named it Shaggoth 6, and participated in an unfortunate foray into gastronomy in creating the Science Fiction Special. He was nicknamed Eo-Pohl, Øred Pohl and Phi.

He was Official Editor of the NYBISA, and launched the Science Fiction Poets' Guild in 1938. He edited the fanzines, Mind of Man, Arcturus, and International Observer. He was a member of the ISA, the ICFC, the SFL, the BSFL, the ENYSFL, the GNYSFL, the NYBISA, the ILSF, FAPA, the QSFL, the STF Poet's Guild, the Futurians Publisher's Association, and the science Fictioneers -- all before 1940.

He was one of the six Futurians prevented from attending the First Worldcon by the Exclusion Act.

He was the Most Senior SF Writer for seven years.

His memoir The Way the Future Was is an essential work of fan history. He wrote for such zines as Algol, Xero and Trap Door. In his early years, he published the fanzines The International Observer of Science and Science Fiction and Mind of Man. Along with Jack Gillespie, he was formally censured by the Futurians in late 1941 for describing their fanzine, Futurian Review, as the club's Official Organ.

At the urging of his editor Jim Frenkel, Pohl, then nearly 90, started The Way the Future Blogs, a weblog recounting his reminiscences as a fan and pro, with the support of a blog team consisting of his wife, Betty Hull, stepdaughter Cathy Pizarro, tech guy Dick Smith and blogmaster Leah Zeldes. On the strength of it, he won the 2010 Hugo Award for Best Fan Writer.

He was editor of Galaxy and IF from 1961 to 1969, edited the Star Science Fiction series for Ballantine, and worked at Ace. He was President of SFWA in 1974.

He was married five times. His first wife, Leslie Perri, was another Futurian; they were married in 1940 and divorced in 1944. Speer described them in Up to Now as “possibly fandom's first matrimonial match.” Pohl then married Dorothy Les Tina in Paris in 1945 while both were serving in the military in Europe; the marriage ended in 1947. In 1948, he married Judith Merril; they had a daughter, Ann. They divorced in 1952. In 1953, he married Carol M. Ulf Stanton, with whom he had three children and collaborated on several books; they separated in 1977 and were divorced in 1983. In 1984, he married sf academic Elizabeth Anne Hull and moved to the Chicago area after a lifetime in New York and New Jersey.

He was the grandfather of writer Emily Pohl-Weary, Ann's daughter.