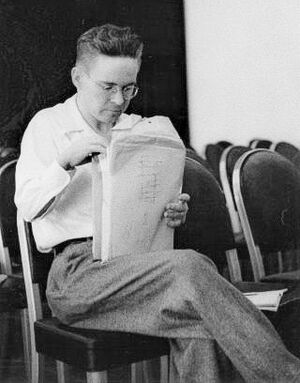 Walter Coslet
(From the collection of Howard DeVore.)

Walter Allen Coslet, nicknamed Coswal, was a well known SF fan, collector, and fanzine publisher as well as a charter member of the International Society of Bible Collectors. He was born in Montana and lived in Helena. He discovered the prozines in 1933, but did not yet become involved in fandom. He lost the use of an arm as a child, which kept him out of WW II.

In 1943, he got a job and started collecting sf and became an avid collector. In 1944 he visited LA, met many fans and bought large numbers of prozines. For the next ten years he devoted himself to collecting, accumulating a huge collection.

He joined the N3F in 1944 and served it as both a vice-president (1947) and as president (1955). He founded Tightbeam and edited The National Fantasy Fan. He owned a ditto machine that F. T. Laney dubbed "Dittorium.” He was briefly OE of SAPS until he was overthrown by Karen Anderson for overreaching. He was a member of The Cult.

By the mid-50s, he estimated that he had 10,000 magazines, more than 2,000 books and so many fanzines that all he could do was weigh them. Unfortunately, he began to tire of collecting SF and turned to collecting English translations of the Bible and was largely gafiated by the end of the ’50s. His many bibliographic projects were never completed (or even started in some cases.) His fanzine collection is now at the University of Maryland.