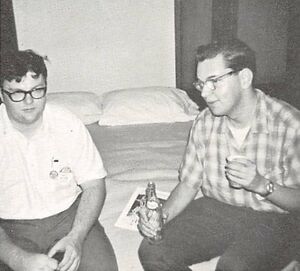 Lon Atkins and Arnie Katz at Midwestcon 1966. Photo from Zingaro #8 by Mark Irwin

Arnie Katz is a longtime fanzine fan and faan living in Las Vegas. He has decided opinions on the nature of trufandom and isn’t afraid to disseminate them.

In 1970, while living in New York, he married fellow fan Joyce Fisher. They published the newszine FIAWOL in the 1970s and also assisted Sam Moskowitz in his publication, A Canticle for P. Schuyler Miller (1975). He co-founded the Brooklyn Insurgents and was a member of the New York in 1967 Worldcon bid, APA-45, and APA-F. He dubbed the Arnie Katz-Approved Neofans.

In Las Vegas, he and Joyce pretty much created a local fandom from scratch. He is a member of the Fanwriting Circle, APA-V and The Cult, He was a member and officer of the Southern Nevada Area Fantasy Fiction Union (SNAFFU), hosted The Monthly Social in the 1990s and also the Vegrants. He was on the Corflu 25 committee.

He published a serious novel set in fandom, The Fractured Circle. He edited The Sweetheart of Fanac Falls, a fanthology of Joyce's writing.