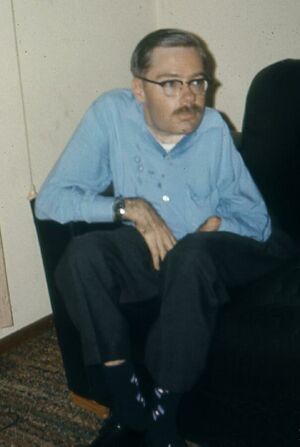 Richard Monroe Sneary, The Hermit of South Gate, a fan active in the 1940s and '50s, contributed much to fandom. (His last name was pronounced "Snary" rhyming with "Mary".) Walter Willis called him “The Great Illiterateur” and his many misspellings became known as “Snearyisms.”

He remains well known for originating the catchphrase "It is a proud and lonely thing to be a fan" and popularizing the South Gate in '58 Worldcon bid.

Organizations he belonged to included the N3F, SFI, SFL (he was member #4495!), ISFCC, FAPA (served as President), SAPS, LASFS (multiple offices), the ISL and OS, and he held office in most of them. (During 1948, Sneary was Chairman of the N3F's Board of Directors and was president of N3F in 1950–1951). He also helped to start Young Fandom, The Petards, The Outlanders and CAPA. He owned a 1950 Chevy called Grossvogel.

Severe asthma kept Sneary out of school as a child and he never learned to spell. He did not let that keep him from contributing to many fanzines and apae, where fans adopted his inadvertent neologisms as avidly as they did the deliberate ones of 4E and others.

Some of his writing was published in 1957 in the Selected Writings of Rick Sneary edited by Len and Anna Moffatt. His collection (including many responses to his thousands of letters) was donated to the Eaton Collection in 1993. After his death, Len Moffatt, June Moffatt and John Hertz published Button Tack: The Rick Sneary Memorial Fanzine.