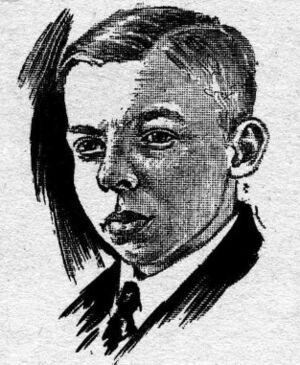 Ray Palmer, aka RAP, growing up in Milwaukee, discovered science fiction in Hugo Gernsback's Amazing and read it voraciously. A childhood accident had caused him to be bedridden for much of his childhood and crippled him for life. He became a fan and is credited, along with Walter Dennis, with creating the Science Correspondence Club and editing what some consider the first fanzine, The Comet, in May, 1930. He published Forum and ran the short-lived Jules Verne Prize Club.

He wrote sf for the pulps and, when Ziff Davis acquired Amazing Stories in 1938 and sacked then-editor T. O'Connor Sloane, on the recommendation of writer Ralph Milne Farley, they offered the editorship to Palmer. He ran Amazing Stories from Chicago, 1938 through 1949. His outré schemes for increasing circulation of the venerable Gernsback prozine, dubbed Palmerism by fandom, included the Shaver Mystery as probably the most egregiously embarrassing example.

He was generous to fans, donating original art from the magazines to convention auctions and graciously spending time with young fans who dropped into his offices. However, he was appalled at Claude Degler’s star-begotten Cosmic Circle, and nearly severed relations with fandom because of it. 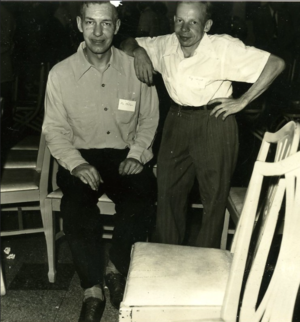 When Ziff Davis moved to New York, he set up his own company to publish and edit Fate Magazine and similar occult drivel, as well as several books related to flying saucers, including "The Coming of the Saucers," co-written by Palmer with Kenneth Arnold. He published the more-or-less straight SF magazines Imagination and Other Worlds, too.

A biography of Palmer by Fred Nadis, The Man from Mars: Ray Palmer's Amazing Pulp Journey, was published in 2013.