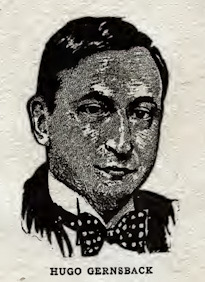 Hugo Gernsback was one of the most important founding figures of modern SF. He was Luxembourgian-American inventor, writer, editor, and magazine publisher, best remembered for creating the first science-fiction magazine and for founding the Science Fiction League, both of which led directly to the creation of fandom.

He played a key role in starting fandom, by publishing letters in his magazines and including the addresses of people who wrote them. Fans who wrote to the lettercol and joined the Science Fiction League Gernsback founded began communicating directly with each other and that was the start of fandom. (See First Fan Letter with Address.) He also coined the term science fiction, though he preferred scientifiction.

In 1940, he published three issues of an SF comic book, Superworld Comics, with the help of his one-time Wonder Stories editor, Charles D. Hornig. This comic book was described by SF historian Sam Moskowitz as the first SF comic book, although the first issue of Planet Comic also appeared early in 1940. An illustrated article about Superworld Comics by Jon D. Swartz appeared in Tightbeam 293 (February, 2019).