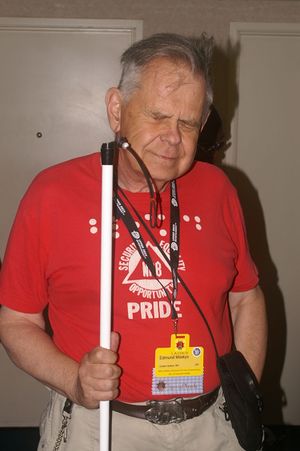 Edmund R. Meskys (pronounced “mesh-keys”) was an American fan who had been active in fandom since joining a local BArea club in December 1955. In 1959, influenced by Leslie Gerber, he started subscribing to fanzines, and at Belle Dietz's urging, joined the N3F apa, N'APA. In the 1960s, he moved away from the Bay Area, first to New York City (where he was a member of the Metrofen, the Lunarians, and ESSFSCCNY) and then to New Hampshire to teach at Belknap College, where he lived since, when not wintering in North Carolina. He called visits to his home in New Hampshire by other fans a Meskon.

Beginning in 1962, he edited and published the Hugo-winning fanzine Niekas along with Felicia Rolfe and, later, many others.

He was one of the founders of Tolkien fandom. He was president of the Tolkien Society of America from 1967-1972, and also edited The Tolkien Journal, Valinorian Times, and Green Dragon. He organized the 1968 Belknap College Tolkien Conference.

Other clubs included ESFA, N3F, and NESFA. He was an associate member of the modern First Fandom club. He was a member of Almack's Society for Heyer Criticism and the Little Men. He was a founder of the Lakes Region SF Group.

Meskys was a member of the Boston in '67 and Boston in 71 Worldcon bids, and helped found Locus as a bidzine for the ’67 bid (he was one of the original rotating editors). He was one of the ill-fated Silvercon committee.

He published the e-fanzine The View From Entropy Hall which was also distributed through APA-Q, as well as Polhode, Herpolhode, and Peskys which were sent to N'APA. He was a member of IPSO and The Cult. He published A. Merrit's Fantasy magazine and The Avenger for SAPS. He edited at least one issue of Tightbeam. He contributed to Who Killed Science Fiction?.

He had been a physicist working on nuclear weapons at Lawrence Livermore National Laboratory. While in his early 20s, Ed lost sight in one eye due to Type I diabetes, and became completely blind in 1971. He was active in the blind civil rights movement through the National Federation of the Blind, and in Lions Clubs. He lived in rural Moultonboro, NH, in the summer and in North Carolina in the winter, with his wife, Sandy, his seeing-eye dog, Gyro (d. 2016), and his fourth-hand cat, Amber.