The third Worldcon, and first in Denver, Denvention was held July 4–6, 1941, at the Shirley-Savoy Hotel in Denver, Colorado. (According to Fancyclopedia 1’s Space warp entry, the hotel was mounted on a turntable “so that you can start near the hotel, walk blocks and blocks, and still be near the hotel.”)

GoH: Robert A. Heinlein. The chairman was Olon F. Wiggins, and Lew Martin was most of the rest of the con committee. The pre-convention publication was the 4-issue CFS Review. The Denventioneer combozine featured eight fanzines.

Denver won the right to host the 1941 Worldcon at Chicon I, apparently over a bid by fans from New York. See Erle Korshak's Putting My Two Cents In and 1941 Worldcon Site Selection.

The proceedings were recorded on 65 phonograph records by Daugherty. There was a combozine, The Denventioneer.

Denvention Medals were given to: 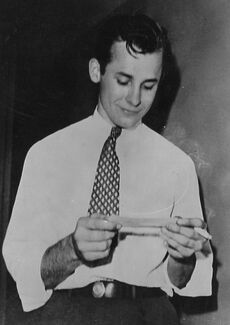 Allen Class at Denvention. From FFF 42.

An additional "Difficulty Prize" of $25 was awarded to Allen Class as the attendee who overcame the greatest obstacles in order to be there; he had hitchhiked from Ohio to Denver! Since F. Orlin Tremaine could no longer afford to pay the prize money, Robert A. Heinlein graciously donated it.

At the costume ball, Forrest J Ackerman wore a mask designed by the young fan Ray Harryhausen, Damon Knight dressed as a junior G-man, Cyril Kornbluth was a mad scientist, and Heinlein as Adam Stink, the world's most life-like robot.

Los Angeles won but the con wasn’t held until 1946 due to WWII.