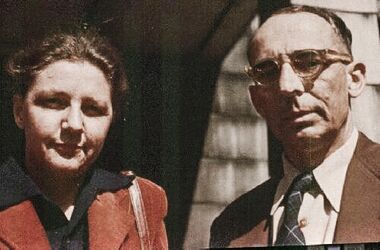 Edmond Moore Hamilton was an author of SF stories during the mid-20th century. With his wife, Leigh Brackett, he was GoH at Pacificon II, the 1964 Worldcon.

Hamilton is credited as the author of the first hardcover compilation of what would eventually come to be known as the science-fiction genre, The Horror on The Asteroid and Other Tales of Planetary Horror (1936). The book compiles the following stories: "The Horror on the Asteroid," "The Accursed Galaxy," "The Man Who Saw Everything," "The Earth-Brain," "The Monster-God of Mamurth," and "The Man Who Evolved."

Through the late 1920s and early 1930s, Hamilton wrote for all of the prozines then publishing, and contributed horror stories to various other magazines as well. He was very popular as an author of space opera, a sub-genre he created along with E. E. "Doc" Smith. His story "The Island of Unreason" (May, 1933, Wonder Stories) won the first Jules Verne Prize as the best SF story of the year.

He was involved in the Mañana Literary Society and was one of the members lightly caricatured (as Joe Henderson) in Anthony Boucher's Rocket to the Morgue.

In 1946, Hamilton began writing for DC Comics, in particular stories about their principal characters Superman and Batman. One of his best known Superman stories was "Superman Under the Red Sun," which has numerous elements in common with his 1951 novel City at World's End. He was instrumental in the early growth of the Legion of Super-Heroes series, as one of its first regular writers. Hamilton retired from comics in 1966.

On December 31, 1946, Hamilton married fellow pro and screenwriter Leigh Brackett, and moved with her to Ohio. Afterward, he would produce some of his best work, including his novels The Star of Life (1947), The Valley of Creation (1948), City at World's End (1951), and The Haunted Stars (1960). In this more mature phase of his career, Hamilton moved away from the fantastic elements of his earlier fiction to create some very realistic stories, such as "What's It Like Out There?" (December, 1952, Thrilling Wonder Stories), his most frequently reprinted story.

Over the years his stories were published under a variety of pen names, including Robert Castle, Hugh Davidson, Will Garth, Brett Sterling, S. M. Tenneshaw and Robert Wentworth.

Born in Youngstown, Ohio, he was something of a child prodigy, graduating from high school and attending college at the age of 14. Hamilton died in 1977 in Lancaster, California, of complications following kidney surgery.

In 2009, Haffner Press released the first two books in a program to collect all of Hamilton's prose work. A volume collecting his first four Captain Future novels also appeared at the same time. Early in 2010, additional volumes were announced.