Hannes Bok was the working name of Wayne Francis Woodward, an American artist and illustrator, as well as an amateur astrologer and sometime writer of fantasy fiction and poetry. Early in life he changed his name to Hans (later Hannes) Vajn Bok -- as a tribute to his favorite composer, Johann Sebastian Bach -- and at other times he used the pseudonym Dolbokgov.

From his first professional cover (the December 1939 cover of Weird Tales) to his last (an illustration of Zelazny's "A Rose for Ecclesiastes" for the November 1963 F&SF, Bok painted nearly 150 covers for various prozines, as well as contributing hundreds of black and white interior illustrations to these publications. Early in his career, he also provided artwork to fanzines, such as Ray Bradbury's Futuria Fantasia and was a protege of Bradbury's.

He was a member of the famed Futurian Society of New York, though until he started selling to Weird Tales, he was pretty much unknown to fandom. When he associated with the Futurians, Damon Knight described Bok as follows: "Bok was a big-chested, well-built man, blond and snub-nosed, with a quiet and somewhat feminine manner. He was certainly the most talented artist ever to work in science fiction illustration." He was "honored" in 1943 when Claude Degler created the (probably non-existent) Hannes Bok Art Society. 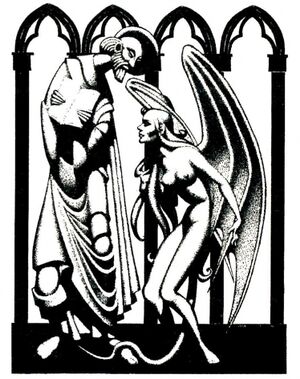 Bok's work graced the dust jackets from early specialty book publishers such as Arkham House, Shasta, and Fantasy Press. His paintings achieved a luminous quality through the use of an arduous glazing process, which was learned from his mentor, artist Maxfield Parrish.

He also did some writing, selling stories to Startling Stories and Unknown, and finishing two incomplete novels begun by A. Merritt, published by the New Collector's Group, a small press he founded with Paul Dennis O'Connor.

As the years passed, Bok was prone to disagreements with editors over money and artistic issues; he also grew reclusive, mystical, and preoccupied with the occult. He eked out a living and was often in near poverty, until his death of heart failure in 1964 -- apparently due to a heart attack. He was only 49. He was eulogized by Lin Carter as "a warm, whimsical, pixyish, sympathetic person."

Bok's friend Emil Petaja set up the Bokanalia Foundation to keep his work alive. In 1970, the N3F published the Hannes Bok Illustration Index, compiled by fans Ned Brooks and Don Martin. This Index consisted of all known published artwork by Bok in magazines, books, art folios/single prints, fanzines, and as miscellaneous items (Christmas cards, program books, calendars, bookplates, catalogs, collaborations, and some non-genre items). There were two subsequent editions of this index, the last in 1994. An illustrated, detailed review of this Index by Jon D. Swartz was published in the December, 2010 (Vol. 10, Nos. 3-4), issue of The National Fantasy Fan.