RAH was one of the major writers of John W. Campbell's Golden Age of Astounding. Along with Asimov, Bradbury, Clarke and van Vogt (pick two), he’s considered one of the Big Three of science fiction writers. For most of his career, he was called the Dean of Science Fiction. He was a Worldcon guest of honor three times in his lifetime and once posthumously.

He wrote under the pseudonyms Caleb Saunders, Lyle Munroe and Anson MacDonald. He used the last in the early 1940s for some of his most well-known stories when they were not in a recognizable Heinlein universe: "Solution Unsatisfactory", "By His Bootstraps", "Sixth Column", "Waldo", "Goldfish Bowl", and "Beyond This Horizon".

He may have originated the idea of a history of the future in sf. His story “The Green Hills of Earth” is commemorated by the Rhysling Awards.

Heinlein in Dimension by Alexei Panshin was the first book-length study of an SF author and still one of the best. Heinlein greatly disapproved of it, and attempted to force the publisher, Advent, to suppress the book. His own self-examination resulted in the posthumous autobiographical work, Grumbles from the Grave, which, unfortunately, seems to have been an accurate portrayal of him in later life. His "official" biography, in two volumes (2010, 2014), was written by William H. Patterson, Jr., co-founder of The Heinlein Society. 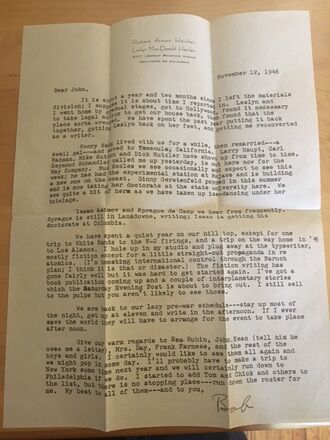 1946 Letter from Heinlein to John Hardecker (from the collection of Allison Phillips). Photo by Margaret Trebing. 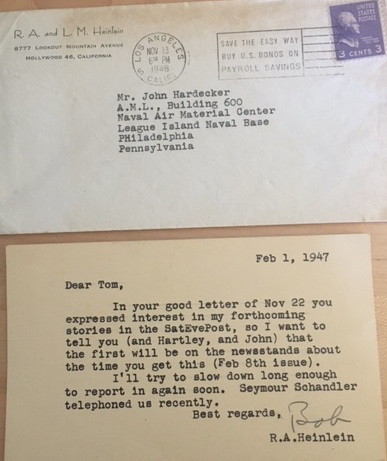 1947 Postcard from Heinlein to Tom (unknown), envelope to John Hardecker (from the collection of Allison Phillips). Photo by Margaret Trebing.