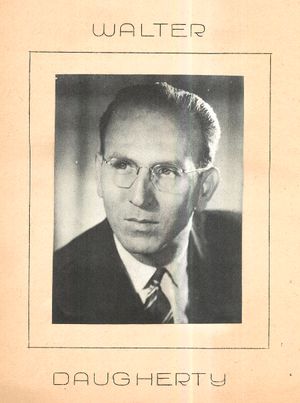 Walter J. Daugherty (called Walt or Wally) was a First Fandomite (though just barely, finding fandom in late 1938). He moved to LA by the early 1940s and became an early member of LASFS. He was behind the Los Angeles in 1942 Worldcon bid and chaired Pacificon, the resulting Worldcon (which didn’t happen until 1946, because of World War II). He was Fan GoH at Baycon, the 1968 Worldcon.

He was known for enthusiasm over grandiose schemes that never quite happened, for which the LASFS Insurgents derided him. See Daugherty Project. However, Westercon was one of his big ideas.

He was the first fan to record a convention: Using phonograph records (Sonodiscs), he captured the sounds of the 1941 Worldcon, Denvention. It's due to him we have Heinlein's complete GoH speech, "The Discovery of the Future." He also served as toastmaster there.

He began the LASFS Fanquet and the Big Heart Award. He was also one of the founders of the N3F.

He was not a very good writer and was named one of the Turgid Triplets. He published Walt Daugherty's Directory of Fandom in 1942. He was editor of some issues of Shangri-L'Affaires. His publishing house name was Shottle Bop.

He chaired Westercon 2, and was FGoH at Westercon 50. He received a special committee award by LACon III for "spearheading the first Los Angeles Worldcon in 1946", and the Big Heart Award in 1968, and was posthumously awarded the First Fandom Hall of Fame award in 2009.

Bob Tucker, Mari Beth Wheeler, Chairman Walter Daugherty and Virginia Laney Daugherty, from left, during Pacificon in 1946, on what looks like a double date. Photo from the collection of Forrest J Ackerman, scan by Andrew Porter.

The son of silent-movie actors Lilly Mae and “Two-Gun” Monte Williams, Walter was born while his parents were filming on location in Oklahoma City, OK. His father died while Walt was a baby, and he was adopted by his stepfather, Jessie M. Daugherty.

He married LASFan Eleanor O’Brien on June 28, 1941. The marriage was brief, and he married Virginia “Jim-E” Laney in 1945, but they, too, divorced. In Shangri-LA 1 (April 1940), T. Bruce Yerke reported that Walt had recruited both Virginia and Eleanor into LASFS, and that they were working together on an entertainment committee.

He was survived by his last wife, Mary Ellen (m. 1973), who wrote a detailed and interesting obituary. He had many, varied interests. He earned a Ph.D. in anthropology and had an abiding interest in King Tut, though he worked in the aircraft industry.