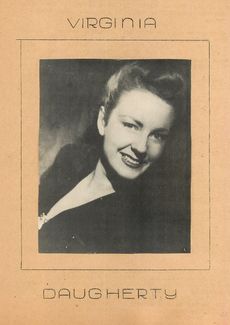 Los Angeles fan Virginia Daugherty (née Laney) published the fanzines Black Flames and Wolf Fan under the penname “Jim-E Daugherty” and sometimes wrote as “Jimmy Laney.” She was a member of LASFS and attended the Pacificon.

She married Walt Daugherty in 1945, his second wife. Jim-E was involved with publishing at least the second issue of Fan. At some point, they divorced, and she married someone named St. George.

In Shangri-LA 1 (April 1940), T. Bruce Yerke reported that Walt Daugherty had recruited both Virginia and Eleanor O'Brien into LASFS, and that they were working together on an entertainment committee. Jimmy wrote more about Eleanor later in the issue. Eleanor would become Walt’s first wife in 1941; they divorced not long afterward.

Jim-E Daugherty, far right, with, from left, Bob Tucker, Mari Beth Wheeler and Walt Daugherty during Pacificon in 1946, on what looks like a double date. Photo from the collection of Forrest J Ackerman, scan by Andrew Porter.

It’s tempting to suggest she was somehow related to Francis Towner Laney, but evidence says not.