From Fancyclopedia 3
(Redirected from E. E. Evans)
Jump to navigation Jump to search 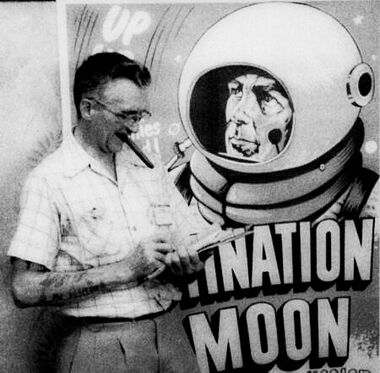 Edward Everett Evans, aka “EEE,” “3E,” “Tripoli,” the “Grand Old Man” and “Th’ Ol’ Foo,” was a longtime fan who became an SF writer. He lived in the Battle Creek Slan Shack and was a member of the Galactic Roamers before moving to L.A. with the other Galactic Roomers.

The Big Heart Award, founded by Forrest J Ackerman to honor outstanding service and generosity to the SF field and for "typifying the spirit of SF writer E. Everett Evans," was named in his honor for many years.

For years, he was active in FAPA (publishing A Tour A Tale of the 'Evans) and LASFS. He published the fanzine The Timebinder in the 1940s, and several one-shot fannish publications such as What is S-F Fandom (1944) for the N3F, which he also helped found.

He was President of the N3F 1943–45, although at the start of World War II, he was suddenly absent for a time — called up for war duties, according to Bonflare. Francis Towner Laney in Ah! Sweet Idiocy!, though, asserted that Evans was actually “serving time in the Michigan State Penitentiary for homosexuality” (which gossip he attributed to Slan Shacker Dal Coger). However, Laney, said, “In justice to him, it is only fair to point out that he claims to have been framed, and, more to the point, that I have never seen him do anything or heard him say anything which could point even remotely to any taint of homosexuality on his part — on the contrary he appears far more masculine than most of the LASFS members, including some known heterosexuals.”

Evans edited Bonfire in 1942–44, and was founding editor of The National Fantasy Fan in 1945. He attended Midwestcon 1 in 1950. He helped to put on the first Westercon.

He was not a very good fanwriter, and was named one of the “Turgid Triplets.” On the other hand, Evans's juvenile novel, The Planet Mappers (1955), won the Boys' Clubs of America annual award for "most enjoyable book." 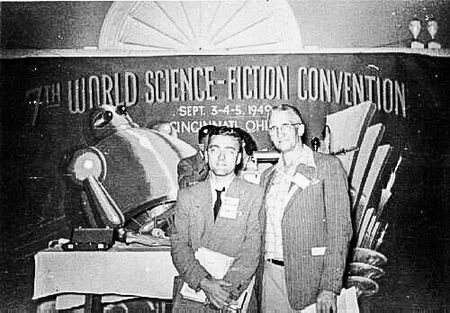 His professional works included the novels Man of Many Minds (1953), The Planet Mappers (1955), Alien Minds (1955), and the posthumously-published collaboration with E. E. Smith Masters of Space (1976).

A compilation of his fantasy tales, Food for Demons, was published by Fantasy House as chapbook #2 in Ken Krueger's Fantasy Reader series in 1975 — with brief encomiums by some of Evans' friends and colleagues including Ray Bradbury, A. E. van Vogt, and E. E. Smith.

He grew up in Battle Creek, MI, and served in the Navy in World War I. During the war, he married Elizabeth Babbitt. They had three children: Virginia (later Satterlee-Newton), Carlton G., and Mary Joan. Everett and Elizabeth divorced during the 1930s.

After he moved to Los Angeles, he married Slan Shacker Thelma D. Hamm in 1951. She wrote science fiction, as well, and his daughter Mary Joan, called Jonne, was also a fan. He died after a series of heart attacks and strokes, another victim of the Year of the Jackpot.