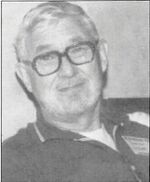 Dalvan Coger attended his first convention, the 1942 Michiconference, and lived in the Slan Shack of Battle Creek before entering the military during World War II.

While in California, he connected with LASFS before being sent to France. About 20 years of gafiation followed.

In the mid-1970s, now a professor of African studies in Memphis, he re-entered fandom and wrote fanhistory articles, some of which appeared in the fanzine Mimosa. He was married to fellow fan Greta Coger.