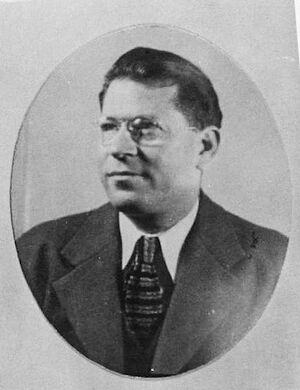 Julius “Julie” Unger, a member of First Fandom, was a New York City SF fan, dealer, and publisher. (In the 1930s, he was one of the biggest SF book and magazine dealers in the business.) He gafiated about 1950 so thoroughly that he gave away his own file copies of his fanzine, Fantasy Fiction Field. He became revenant only a few months before he died.

He was a founding member of The Scienceers, the first fanclub, a member of the committee for the First Worldcon, and one of the fen on the Widneride to Denvention. He was catcher in the softball game played at Nycon I. He was a member of the QSFL.

During the 1940s, Unger published several fanzines, including FFF FANEWSCARD, FFF's Yearbook of Science, Weird & Fantasy Fiction for 1941, and the weekly Fantasy Fiction Field, reviving it in 1962 (with the aid of Harvey Inman).

He (along with Harry Warner) was responsible for the Odd Tales hoax.

In 1937, he married Beatrice Gilsenberg and they had a son, Jay, that year. He died of a heart attack in January 1963. Beatrice, who also went to QSFL meetings, died in 1987.